A 250-person-capacity American Princess cruiser pulled away from a Midtown ferry dock at 5:00 p.m. on Wednesday with three Long Island Railroad passengers on board, en route to Long Island City. The boat looped back around for the 5:20 p.m., and picked up three more passengers.

Earlier, a 4:40 p.m. LIRR ferry to Hunterspoint, the 330-capacity Tails of the Sea, departed with two riders, outnumbered by the boat's crew.

The nearly-empty boats charted by the MTA have been cross-honoring LIRR tickets since July 10th for riders impacted by ongoing emergency repair work at Penn Station. Several LIRR trains that typically terminate at Penn Station have been rerouted to Hunterspoint Avenue in Queens, and ferry service is intended to help LIRR riders get to and from Midtown while Penn Station is less accessible. While the MTA has already scaled back on a similar shuttle bus service after wide reports of underutilization, no such adjustments have been made on the water.

"We're continuing to evaluate our service, and we will make adjustments as needed," MTA spokesman Aaron Donovan stated.

The ferries have proven puzzling for East River Ferry riders, who queue up during the evening rush hour while orange-vested MTA workers usher tiny batches of LIRR riders onto seperate boats.

"Look how many people are here waiting for the Brooklyn one," said Matthew Krueger of Greenpoint, waiting to board the East River Ferry with his bicycle on Wednesday. "It runs every 30 minutes, and then you've got LIRR and all of this stuff that run completely empty. It would make a lot more sense to every 15 minutes run the ferry, particularly during the summer."

"You can't have a ferry shuttling two or three people every time," echoed Adam Aprigliano, 39, a lawyer who works in Manhattan and commutes by East River Ferry to Hunters Point. "It's been a week and a half and it's the same nonsense. The real solution is for the [East River Ferry] to take LIRR tickets."

"I pick up my daughter and her friend at camp and take them on the ferry," he added. "I was joking with my friend: What if these girls just ran on the shuttle boat and I ran after them? What are they going to do, kick us off?"

The MTA declined to provide specific ridership numbers for the ferries, which depart from Glen Cove and Hunterspoint in the mornings, and from 34th Street and Wall Street/Pier 11 in the evenings.

Donovan also declined to comment on the cost of the ferry service, and American Princess and Tails of the Sea did not immediately respond to requests for comment. Acting MTA Director Ronnie Hakim recently hinted at a price tag in the millions for all planned LIRR contingencies—a bill that neither the MTA, nor Amtrak, would like to front.

Andrew Albert, chair of the New York City Transit Riders Council and a nonvoting member of the MTA Board, told Gothamist Thursday that the board has not received any updates on the cost. He plans to raise the issue at a board meeting scheduled for next week.

"We shouldn't be spending money if it's not necessary because the system badly needs money as you know," he said. 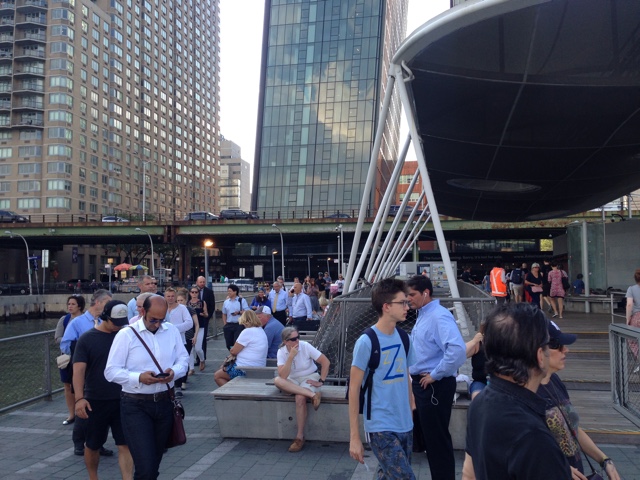 More than 80 East River Ferry riders wait to board the 5:27 p.m., minutes after an LIRR ferry departed with three passengers. (Emma Whitford / Gothamist)

On a press call with reporters last Friday, MTA Chairman Joe Lhota also declined to offer specifics about ferry ridership, though he said that LIRR riders seem to "much prefer" the subway to the ferry. He added that the Glen Cove trips, which take LIRR riders between a park-and-ride lot in Glen Cove and Wall Street or 34th Street, are performing "better," with riders in the "high 30s-to-50s range" per trip.

The LIRR Oyster Bay Branch, which serves Glen Cove, does not offer a single-seat ride to Manhattan. This could explain the popularity of the new ferry service for some riders, Albert said.

"It seems like an awesome service, I just think a lot of people don't know it's there," said Rod Lanborn, 47, a Long Island City resident waiting for the East River Ferry at 34th Street on Wednesday with his daughter. "It probably burns at least a gallon of gas to get to the other side. If it was full, it would be amazing."

The LIRR ferries have been "underutilized," added an East River Ferry worker at 34th Street, who declined to provide his name. "I think that the word's not out."

"One guy said, 'At some points in time you don't have enough players for checkers," he added. "Maybe with the captain."

#East River Ferry
#Hunterspoint
#lirr
#we the commuters
#original
Do you know the scoop? Comment below or Send us a Tip
A new Gothamist is coming! We’ve moved comments over to our beta site. Click here to join the conversation and get a preview of our new website.