In 1949, E.B. White famously asserted that New York is "peculiarly constructed to absorb almost anything that comes along...without inflicting the event on its inhabitants." He calls out the St. Patrick's Day Parade as perhaps the sole event that successfully "hits every New Yorker on the head." White, unfortunately, is not around to chronicle the arrival of Pope Francis, who will be rolling into town on September 24th—the same time as delegates arrive for the U.N. General Assembly. Anyone trying to take the subway that day will be forced to acknowledge that something is up. (Here's a comprehensive list of street closures and mass transit changes.)

The convergence of events has sent no less than 48 city and federal agencies into a flurry of anticipatory hustle, imagining and preparing for all manner of horrific disasters that could beset the day: Active shooters (two—one at a hospital, another in a train station), a power outage, a collapsed building, were all fictitious disasters the agencies were asked to coordinate. (An announcement from NASA that an asteroid was heading for NYC was quickly revealed to be a joke...ha ha, security humor, amirite?) 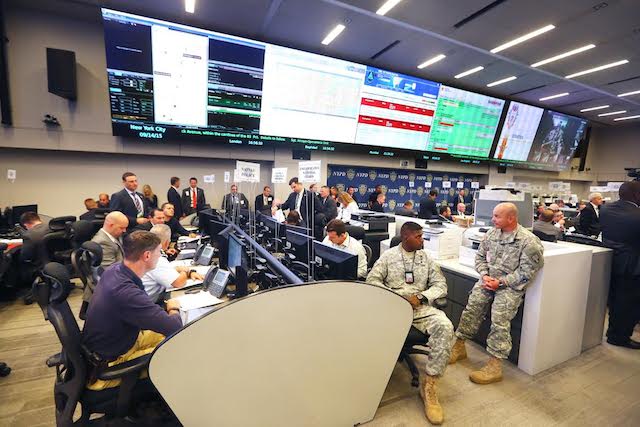 The National Guard was one of many agencies participating in the security preparation. (Chang W. Lee/The New York Times)

Police Headquarters was, for the second time, the staging area for the Multi-Agency Coordination Center Exercise, giving all the agencies involved the opportunity to "see the stretching of our resources," the NYPD’s deputy commissioner for intelligence and counterterrorism, John J. Miller, told a pool reporter. “A lot of wheels turning at once.”

The pope will be passing through New York for only one full day before heading to Philadelphia, though his schedule is positively crammed with activities. The challenge for those tasked with keeping him safe, though, stems from his passion for mingling with the populace.

"He likes to get out with the people and with that comes a large security risk. We are monitoring very closely threats against the pope as he comes into the United States,” Representative Michael McCaul (R-Texas) said on ABC’s “This Week.” “We have disrupted one particular case in particular, but as that date approaches, I think we’re all very, being very vigilant to protect him as he comes into the United States.”

The Secret Service, which is leading security efforts, would not elaborate on the thwarted threat. During his stay in NYC, law enforcement officials are imposing a no-fly zone and a ban on drones.

Pope Francis will arrive on September 24th, with a next-day schedule that includes a visit to the U.N. to address the General Assembly, a service at the 9/11 Memorial and Museum, mass at Madison Square Garden and a jaunt through Central Park.

Tickets to attend mass with the world's highest-ranking living Catholic were available for free, albeit incredibly limited. Now, of course, scalpers are selling them on Craigslist for upwards of $750, because no force, not even Jesus Christ himself, can contend with capitalism.

#papal visit
#pope francis
#security
Do you know the scoop? Comment below or Send us a Tip