Nearly 2,000 Complaints Of NYPD Racial Profiling Since 2014—And The Department Found Nothing Wrong

by Cindy Rodriguez and WNYC Staff

The New York City Police Department has failed to substantiate a single case of racial profiling or biased policing since a federal judge ordered them to investigate complaints from the public in 2014, according a report released this morning by the department’s Inspector General.

“NYPD officials confirmed in June 2019 that the Department has never substantiated an allegation of biased policing,” says the report released by Inspector General Philip Eure and the Department of Investigation.

The NYPD never investigated complaints of racial profiling or bias until it was ordered to do so as part of the landmark settlement in a civil-rights suit over its stop-and-frisk policy.

Eure’s office examined 596 cases containing 888 allegations of biased policing. They found that more than two thirds of them involved someone from the public alleging they were discriminated against because of their race, ethnicity, color of their skin or their country of origin.

“A disproportionate number of identifiable biased policing complainants are Black — a disparity that may reflect problems concerning the NYPD’s relationship with the Black community,” the report states.

In a statement, the NYPD insisted that "the instances cited in the OIG report represent less than .001 percent of the millions of annual NYPD interactions with the public," and that the report "does not capture the effect of all of the reforms the NYPD has implemented since 2014."

“Even with the positive changes already made, and the full context of this report, the NYPD knows there is more to do. The Department will continue to work with fellow agencies to improve its efforts in line with many of the recommendations contained in the Report," the statement reads.

The report comes as the city approaches the fifth anniversary of the death of Eric Garner, a black man who died after he was placed in an apparent chokehold by a white police officer during a misdemeanor arrest on Staten Island.

Garner’s death on July 17, 2014, captured on a cell-phone video, sparked outrage and ignited waves of protest across the country, fueling the Black Lives Matter movement.

The officer, Daniel Pantaleo, was not charged with a crime but faced a departmental disciplinary trial last month. Police Commissioner James O’Neill has yet to release his decision on whether Pantaleo will be fired and lose his pension.

The judge’s order to investigate bias complaints stems from the high-profile federal lawsuit, decided in 2013, that found the NYPD’s practice of stop, question and frisk unconstitutional and discriminatory.

At its peak in 2011, the NYPD recorded more than 685,000 stops and 87 percent involved someone who was either black or Latino. The judge’s order to investigate bias complaints was one of several remedies now overseen by a federal monitor.

“Communities affected by certain policing practices report high levels of distrust of the police,” the report said. “Concerns regarding bias (or the perception of bias) by officers are, among other factors, intricately tied to public trust in law enforcement.”

The report gives several examples of complaints made by the public against police officers. In one case, a woman said that her black husband was racially profiled when two police officers blocked his Bentley, and when they couldn’t verify whether his disability placard was legitimate they wrote him a ticket for littering based on a discarded cigarette butt. She accused one of the officers of calling her husband the n-word.

Racial slurs alone are not investigated by the NYPD because the department says an officer has to also take an official police action, such as write a summons or make an arrest, to constitute racial bias. Instead, the NYPD refers those cases to the Civilian Complaint Review Board, which investigates them as cases of “offensive language.”

The CCRB does not investigate complaints of racial bias, but instead refers them to the NYPD. “This makes CCRB an outlier among the independent review agencies that primarily handle complaints of police misconduct in the largest U.S. police departments,” the report says.

In another example of alleged police bias, a man said that two officers pushed him up against a wall and called him a “Mexican piece of shit” after they found him sleeping in a building. In another case, a black male said officers stopped him because of his race and then planted illegal drugs in his car.

That case was closed as unfounded because the investigator said no racial or derogatory statements were made and because passengers in the car with the man pled guilty to disorderly conduct.

“Because pleading guilty to disorderly conduct does not resolve whether the complainant was pulled over because he is Black, this example represents a flawed approach to resolving actual biased policing claims,” the report said.

The report says 44 percent of the complaints analyzed involved a car stop. 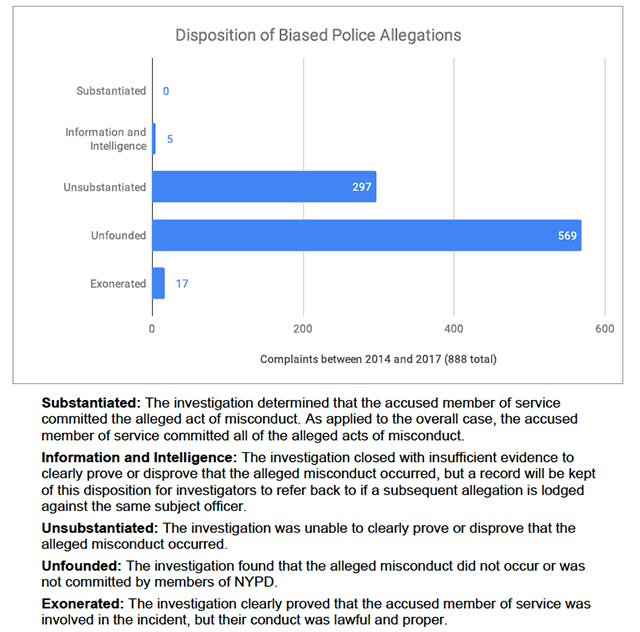 The Inspector General’s office did not come to firm conclusions about whether the inability to substantiate a single case was justified by the evidence, because for the most part they only looked at summaries of the cases and not the entire case files.

The report says investigators must find “discriminatory intent” to substantiate a case, and acknowledges the difficulty of meeting that standard. But the report also calls out NYPD investigators for certain trends and practices that contribute to the problem.

For instance, police failed to interview the complainant about 20 percent of the time. Police investigators said that was because the person couldn’t be reached, was uncooperative or withdrew the complaint.

“NYPD considered several complainants ‘unavailable’ due to incarceration, even when the complainant was being held at a jail within New York City,” the report said.

The report also found that in several cases, the decision not to substantiate the complaint may have been based on the police officer being of the same race as the person complaining.

Police investigators also regularly conducted background checks on the people who make complaints, as well as on the alleged victims or witnesses of the police misconduct. The results often revealed prior arrests, but the report said it was unclear how this factored into an investigator’s final decision not to substantiate a complaint about alleged bias policing.

Officers with the least amount of time on the force have the highest number of complaints against them. The report says that may be because those officers interact with the public the most.

With input from the federal monitor, the city also requires anti-bias training for new recruits at the Police Academy. The report says they attend a total of 14 hours of training about biased policing, taught by academy instructors. That report notes that recruits in Los Angeles get 33 hours of such training.

The Office of the Inspector General recommended that the NYPD amend its patrol guide and its written investigative procedures to correct some of the problems. It said that complaints about racial slurs should be investigated as potential bias, and the CCRB should investigate racial bias cases under its Abuse of Authority powers. It also said the department should start tracking allegations of biased policing and monitor officers with repeated complaints against them, as happens with other forms of police misconduct such as the excessive use of force.

The report also recommends that police post statistics about profiling complaints for the public to see.

This story has been updated to include the NYPD's comment on the report.

#nypd
#NYPD Inspector General
#racial profiling
Do you know the scoop? Comment below or Send us a Tip