Amazing: The NYPD is securing an area between some lower Manhattan buildings as a crime scene because they've discovered a piece of airplane landing gear that appears to be from one of the doomed planes that crashed in the World Trade Center on September 11, 2001. And it was found behind the so-called "Ground Zero" mosque. 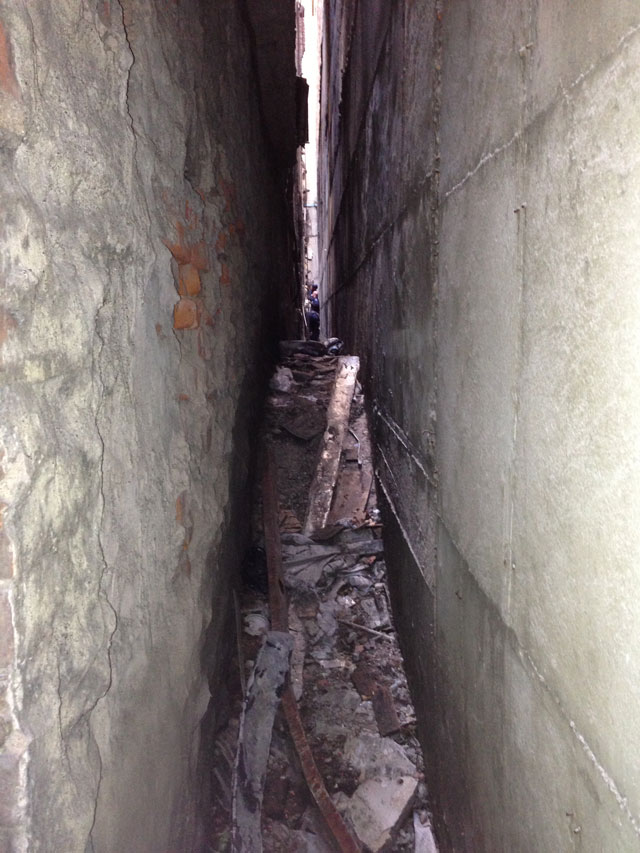 In between the buildings (NYPD)

A part of a landing gear, apparently from one of the commercial airliners destroyed on September 11, 2001, has been discovered wedged between the rear of 51 Park Place and the rear of the building behind it, 50 Murray Street, in lower Manhattan. The NYPD is securing the location as it would a crime scene, documenting it photographically and restricting access until the Office of the Chief Medical Examiner completes its health and safety evaluation protocol, after which a decision will be made concerning sifting the soil for possible human remains.

The aircraft part will not be removed until the process is completed, at which point it will secured by the NYPD Property Clerk. The part includes a clearly visible Boeing identification number. The investigation into the find began after surveyors hired by the property owner who were inspecting the rear of 51 Park Place on April 24 called 911 at approximately 11 a.m. to report what they identified as apparent damaged machinery behind the building there.

You may recall that part of the argument against the mosque and community center planned for 45-47 Park Place was that landing gear hit the building. The developer, Sharif El-Gamal, who just bought 43 Park Place, has been leasing 51 Park Place from Con Ed for years. (Con Ed can't evict them... yet.)