Near Hit at JFK in Second Recent Incident 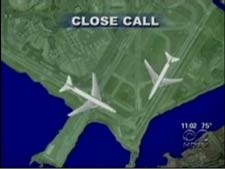 The FAA made immediate changes to the take off and landing procedures at JFK Airport, after two jets came within 600 feet of crashing into each other yesterday afternoon. The incident was the second near collision at the airport in a week, and personnel from the National Transportation Safety Board were at JFK investigating the circumstances of the first incident when the second occurred.

According to the New York Post, a Boeing 757 arriving from Ireland narrowly avoided a collision with a Bombardier regional jet that was taking off from a perpendicular runway. Simultaneous take offs and landings from perpendicular runways were allegedly the cause of an incident last Saturday when a jet bound for Santiago, Chile and another arriving from the Cayman Islands escaped crashing with seconds to spare. The FAA has banned the practice of simultaneous perpendicular departures and arrivals at the airport.

The change in procedures should reduce further the take off and landing capacity at JFK, which already suffers from one of the worst record of travel delays in the nation. Senator Chuck Schumer--a persistent critic of the FAA--says that the rule changes are insufficient and more air traffic controllers need to be hired at area airports.

#air planes
#chuck schumer
#collision
#faa
#jfk airport
#ntsb
#safety
Do you know the scoop? Comment below or Send us a Tip