NBC Taps Tom Brokaw For Meet the Press, For Now 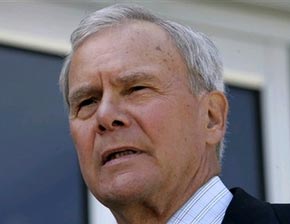 NBC News just announced that retired Nightly News anchor and eminence grise Tom Brokaw will moderate "Meet the Press" through the 2008 election. NBC News president Steve Capus said, "A lot has been said in recent days about what 'Meet the Press' means to NBC News and to the nation. To have someone of Tom's stature step up and dedicate himself to ensuring its ongoing success is not only a testament to his loyalty to Tim, but his enduring commitment to NBC News and our viewers."

After MTP moderator Tim Russert's sudden death on June 13, there had been much speculation about who might fill the void. Page Six even suggested MSNBC's Chris Matthews was plotting how to land the job--at Russert's memorial service--and that fellow MSNBC personality Keith Olbermann threatened to quit if not named the new moderator, prompting Olbermann to blast the reporter behind the item and say he's not even qualified for the job. So Brokaw's appointment is probably a relief to many--and Newsday's Verne Gay outlined why he is right for the job last week.

Brokaw, who hosted a special edition of Meet the Press last week where friends remembers Russert, said, "I've been appearing on 'Meet the Press' since the days of Watergate when it was moderated by Lawrence E. Spivak right through the distinguished tenure of my great friend, Tim Russert, so I feel right at home. Tim made 'Meet the Press' the center of the universe for informative and lively discussions of public affairs, particularly the exciting 2008 campaign for president, and I intend to continue that commitment to our viewers."

#election 2008
#journalism
#meet the press
#nbc
#nbc news
#Tim Russert
#tom brokaw
#tv
Do you know the scoop? Comment below or Send us a Tip