A team of Navy SEALs rescued two aid workers who had been held hostage by Somali pirates since October 25 last year. Jessica Buchanan, 32, who is originally from Ohio, and Poul Hagen Thisted, 60, a Danish citizen, were being held in Galkayo, a sleepy regional capital in north-central Somalia, when, the NY Times reports, "Under a cloak of darkness, the Seals parachuted in, stormed the hide-out, killed nine gunmen and then whisked the aid workers into waiting helicopters, Pentagon officials said." And: "The Seals were from the same elite Navy commando unit — Seal Team Six — that secretly entered Pakistan to kill Osama Bin Laden in May, senior American officials said, though the rescue mission in Somalia was carried out by a different assault team within the unit." 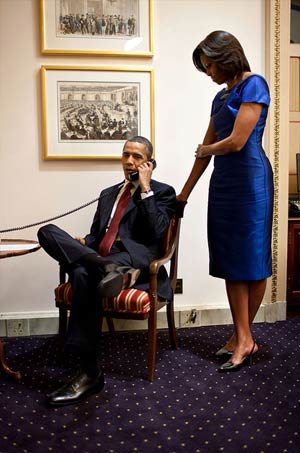 Buchanan and Thisted were rescued by the time President Obama gave his State of the Union address last night. When he entered the House chamber, he told Secretary of Defense Leon Panetta, "Leon, good job tonight, good job," which microphones picked up. According to CBS News, "The mission's timing was not determined by the State of the Union but instead by weather and the new moon." Obama issued a statement:

On Monday, I authorized an operation to rescue Jessica Buchanan, an American citizen who was kidnapped and held against her will for three months in Somalia. Thanks to the extraordinary courage and capabilities of our Special Operations Forces, yesterday Jessica Buchanan was rescued and she is on her way home. As Commander-in-Chief, I could not be prouder of the troops who carried out this mission, and the dedicated professionals who supported their efforts.

Jessica Buchanan was selflessly serving her fellow human beings when she was taken hostage by criminals and pirates who showed no regard for her health and well-being. Last night I spoke with Jessica Buchanan’s father and told him that all Americans have Jessica in our thoughts and prayers, and give thanks that she will soon be reunited with her family. The United States will not tolerate the abduction of our people, and will spare no effort to secure the safety of our citizens and to bring their captors to justice. This is yet another message to the world that the United States of America will stand strongly against any threats to our people.

The Washington Post reports, "Buchanan and Thisted worked for the land mine clearance unit of the Danish Refugee Council, which provides shelter, protection, food and other assistance for thousands of displaced Somalis in Mogadishu. They were in Galkayo to monitor humanitarian aid activities, the council said."

It was believed that Buchanan's health had been deteriorating. Panetta's press secretary says the pirates were heavily armed with explosives nearby. BBC News called this the U.S.'s highest profile activity in Somalia since pulling out troops in 1994.

#navy seals
#president obama
#rescue
#seal team 6
#somali pirates
#somalia
Do you know the scoop? Comment below or Send us a Tip