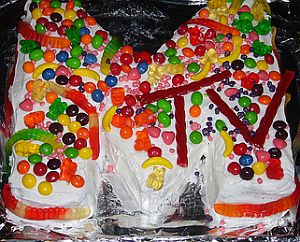 More on that student prank gone horribly wrong: The Daily News has it that seniors at the Brooklyn School for Global Studies who served their teachers cake laced with laxatives got the idea from watching MTV’s prank-reenactment show High School Stories. Two teachers ended up in the emergency room last week after eating the tainted cake, which was prepared by a straight-A student and her two friends, and ultimately sickened a grand total of two crossing guards, a social worker and three teachers.

The students were looking forward to four years of college, but now they're facing a maximum seven years of prison; yesterday police charged them with special counts of second-degree assault and reckless endangerment. It seems likely that the authorities are just trying to teach them a lesson about “actions” and “consequences,” which, coincidentally, is exactly what MTV says High School Stories is all about. In a statement, the network declared that “MTV always depicts the very real ramifications of these actions, showing how seemingly harmless pranks can have serious consequences.”

But MTV has yet to learn about the serious consequences of airing this episode, which also inspired another laxative poisoning incident last year on Long Island, when some eighth graders served their teacher and 19 other students laxative laced donuts. Also, note to teachers: Students are trying to poison you. Do not eat or drink anything they give you!

In any case, the Brooklyn students will have to finish the school year at an alternative learning center. According to Fox News, if they need to visit their old school they’ll need to be escorted by a parent or guardian, and the pranksters won’t be allowed to liven up the graduation ceremonies with their presence, either.

#arrested
#brooklyn
#cake
#high school
#hospital
#laxative
#prank
#sick
#students
#teachers
Do you know the scoop? Comment below or Send us a Tip