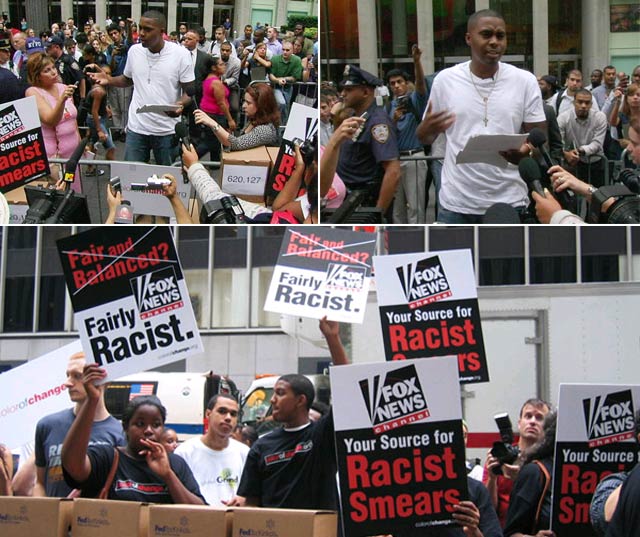 Photographs of Nas and other protesters outside the Fox News studios

Hip-hop star Nas, along with other protesters, were at the Fox News Channel yesterday, delivering over 620,000 petition signatures and charging the cable network offered racist coverage. Nas said, "Fox poisons the country with racist propaganda and tries to call it news," pointing at how Fox personalities called Michelle Obama a "baby mama," and added, "But the Obamas aren't the only targets. Fox's pattern of race-baiting and fear-mongering regularly focuses on black leaders, black institutions and ordinary black people." And he explained why he worked with the website ColorofChange.org to protest the channel:

"The organization saw me as someone who could be a part of it, and they reached out. I was like, 'Hell yeah, I'm a part of it!' This is a network that's been going after rappers ... yet Bill O'Reilly uses the phrase 'lynching party' for a woman. That's the worst term I've ever heard to disrespect a woman, and he says it on television. And he doesn't like rappers? Wow."

In turn, Fox News said, "Fox News believes in all protesters exercising their right to free speech including Nas who has an album to promote." Nas also appeared on The Colbert Report last night. Before his interview with the Nas (who explained the controversial original name for his upcoming album), Stephen Colbert had gave some background to the feud between Colbert and O'Reilly. Videos after the jump: