Nanny Dies While Trying to Save Drowning Boy 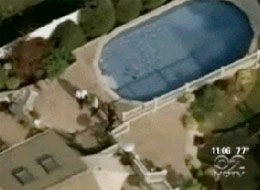 A nanny in Syosset, Long Island died after jumping into a backyard pool when her 3-year-old charge was struggling in the water. Nassau police spokesman Det. Sgt. Anthony Repalone said the boy had been wearing a life vest, but "It's possible that the 3-year-old child removed his jacket and got into the pool."

The boy's mother heard the screams from the house and ran out, able to pull her son from the water but yelled for help with the nanny. WCBS 2 reports the first volunteer firefighter-EMT arrived to find "the mother sitting inside on a couch holding her son," who was blue. He and another firefighter performed CPR on the boy, who started to breathe and then went to the pool, to get the nanny out, with the help of a police officer and neighbor. The nanny, who was in her 60s, was pronounced dead at the hospital.

The boy was in critical but stable condition at a local hospital. This comes the day after a 2-year-old drowned in her family's Central Islip home's pool and the state adopted pool alarm requirements.