The brutal double murder of two children on the Upper West Side continues to shock New Yorkers as a portrait of the suspect—their beloved nanny—emerges. Yoselyn Ortega, 50, had been in a medically-induced coma after apparently stabbing Lucia Krim, 6, and Leo Krim, 2, in their apartment before turning the knife on herself. Police spokesman Paul Browne revealed that Ortega's family said that "over the last couple of months [she] was not herself... She was, according to others, seeking some professional help. There were financial concerns." 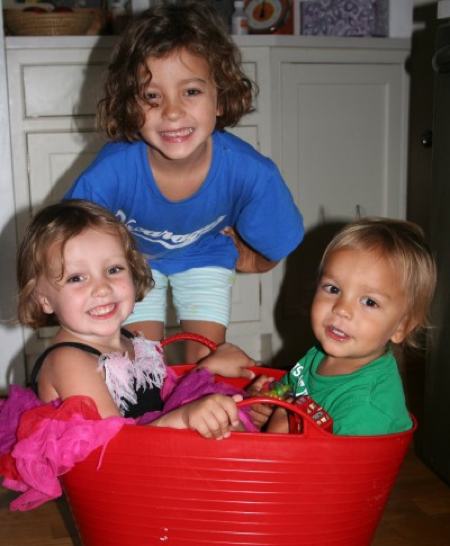 Police say that on Thursday around 5:30 p.m., Marina Krim returned to her apartment with three-year-old daughter Nessie, because Ortega didn't bring Lucia and Leo to a dance studio as previously arranged. Krim found the apartment dark and asked the doorman if the nanny and children had left. He said they hadn't, and Krim went back to the apartment. She entered the apartment and found the two children, stabbed in a bloody tub. Police Commissioner Ray Kelly says, at that point, Ortega started stabbing herself in the neck.

Krim started screaming, and a super rushed in and neighbors called 911. The children were pronounced dead at the hospital. The ME's office says that Lucia's cause of death were "multiple stab and incise wounds" in the stomach and neck and Leo's was from "incise wounds of the neck." The Post's source says, "They both suffered. They bled out. The little girl tried to protect herself," because some of her wounds seemed to be defensive. The Times reports, "They had been clothed, a law enforcement official said, suggesting that Ms. Ortega had not been bathing the children."

The children's father, Kevin Krim, had been on a flight, and police met him at the airport to tell him the terrible news and took him to the hospital where his wife, who was sedated, and child were.

Ortega had been living with her sister in Hamilton Heights, and a neighbor said, "She lost a lot of weight. She looked very unhealthy. It looked like she was going through some problems. She had aged a lot — like seven years in a few months." A source told the Post that "Ortega, a Dominican who has been a US citizen for 10 years, complained of money troubles, and her employers, Marina and Kevin Krim, had given her more hours of work. They even hooked her up with a family they knew for a baby-sitting job on the side — but the family turned her down after an interview because she was, 'a little too grumpy,' a law-enforcement source said."

According to DNAinfo, Ortega is currently in a "catatonic" state—doctors don't know why—and detectives can't question her: "When the anesthesia wore off, doctors expected her to return to normal and be lucid enough to speak with them and the police. Instead, they've got a medical mystery on their hands, sources said. Ortega isn't speaking or responding to anyone or anything. Ortega's neck wound isn't severe enough to cause the catatonic state, because the gash didn't hit any major veins or arteries." She had not taken any pills either.

Kevin Krim's mother, Karen Krim, told the Daily News that the couple had employed Ortega for two years, "They were always doing things that were just fabulous for her... I’m just astounded, and I have no idea why something like this would happen. They just bent over backwards being nice to this woman... They treated her like family. My daughter-in-law, if she thought there was anything wrong, she would have never left the two with her. This had to be something simmering inside this woman. Obviously, she went insane."

The Times spoke to a friend of Ortega's, Maria Lajara, who said she "had stopped by to tell her how happy she was that she had found a new apartment in the Bronx for herself and her 16-year-old son. She said that Ms. Ortega had conveyed how much she loved working for the Krims and that she was paid and treated well. Also this year, she said, the Krims had given Ms. Ortega an Ann Taylor jacket as a gift."

However, the person Ortega was renting the apartment from returned and kicked her and her son out, sending them to live with her sister. The Times adds, "Twice, Ms. Ortega asked Ms. Lajara to pray that a woman would pay her for makeup she had given her to sell. The amount, Ms. Lajara said, was about $100, and it was important to her... Ana Bonet, 40, a neighbor, said that besides her nanny job, Ms. Ortega sold inexpensive jewelry and makeup to neighbors. Others said she also earned money by cooking rice and chicken dishes for parties."

Karen Krim, the children's maternal grandmother, said of her daughter-in-law, “She didn’t even leave the kids that much alone with this nanny; that’s the irony of all this... She didn’t have a nanny so she could go out and play tennis — not that there’s anything wrong with that. But she was always with the kids, and Josie just helped her because, with three little kids, it’s really hard."

And paternal grandfather William Krim told DNAinfo, "Our son texted our daughters to say, 'I can't talk to Mom and Dad right now because I'll just fall apart.' He said he has to be strong for his wife and his middle daughter that survived the killing." He added that his son's employer, CNBC, had put them up in a hotel so they didn't have to go back to the apartment, "I don’t know if they ever will. I don’t know if I could."