Naked New Yorker: "I Had a Bad Day" - Now With Video 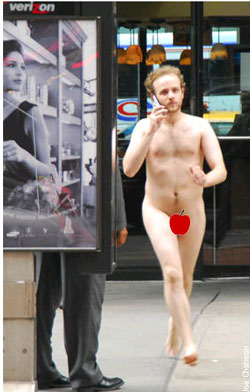 The 26-year-old Yale graduate who walked around Times Square naked on Thursday spoke to the NY Post, which made him its cover boy, about his experience. Josh Drimmer denied that it was a stunt and said - from his hospital bed at Bellevue - "It was an extreme panic attack brought on by days of not sleeping...I'm all right. Tell everyone I'm OK. I had a bad day."

Good to know that Drimmer is better, because he has his fans: One Times Square office worker told the Post, "I thought it was great. He's not hurting anyone." Drimmer works for the media company MediaVest, which is located at 1675 Broadway at West 52nd Street. A co-worker said that Drimmer seemed out of it (he was "talking crazy") recently while another said the Greenpoint resident once "had a meltdown over the coffee machine."

Public nudity is considered a public nuisance, and the police did stop Drimmer from continuing his nakedness - check out this Post photo gallery of Drimmer walking around and his meeting with the police. In New York, it turns out that women can go topless, since men are allowed to. Jacob Riis Park's beach has a clothing optional area, and here's a funny Time article from 1974 noticing how more and more Americans were going naked at the beach.

And Drimmer wanted to clear something up: The Post called him a "curly-haired hipster" but he said, "I am not a hipster."

Update:
We found a brief 17-second video of a Times Square worker who filmed Drimmer (or at least we think it's him - the resolution isn't the best) running back and forth on the street and then is apparently stopped by the cops. The office was stunned and giggly!