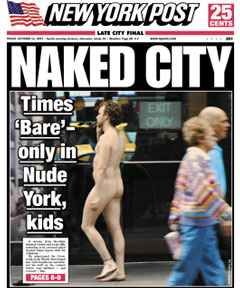 A 26-year-old Yale graduate and Greenpoint resident got a lot of attention in Times Square yesterday - and the NY Post's cover today - by walking around naked. The Post reports that Josh Drimmer was walking in his birthday suit for "several minutes" around 11AM along Seventh Avenue between West 47th and 48th Streets. Reporter Jennifer Fermino overheard one witness calling a friend on his cellphone and saying, "Yo, homeboy's got full-frontal nudity right here!"

At first, Drimmer was wearing one black sock, but then "he ditched the sock and went the full monty." He tried to get into the Olive Garden to, no avail, (competing breadsticks?), went into Tad's Steakhouse, and then was stopped by the police. Apparently someone found his clothes and brought them over, but Drimmer refused to wear them and was taken to Bellevue for observation.

People were alternately amused and jaded: One said, "I want to be on what he's on," while another said, "The Naked Cowboy's always here. What's the difference?" Drimmer's father told the Post he didn't know why his son was naked in Times Square.

Update: Drimmer has a blog, Excellence Makes Wack Irrelevant, and he reads Gothamist! Readers, which one of you will be next to wander the streets without a shred of clothing?

#cats
#gothamist
#naked
#naked cowboy
#News: NYC
#nudity
#ny post
#olive garden
#people
#police
#Seventh Avenue
#The Naked Cowboy
#The Police
#Times Square
Do you know the scoop? Comment below or Send us a Tip
A new Gothamist is coming! We’ve moved comments over to our beta site. Click here to join the conversation and get a preview of our new website.