Hundreds of nail salon owners and workers demonstrated in front of City Hall yesterday against economic regulations put in place by the state after the New York Times published a two-part series on labor abuses in the industry earlier this year.

The demonstrators' primary target was the wage bond, a form of insurance meant to protect workers from wage theft. In response to the Times' reporting, Governor Cuomo signed legislation requiring salon owners to obtain wage bonds, and made operating an unlicensed nail salon a criminal offense.

The owners believe Cuomo reacted too quickly to the Times piece, hurting an industry of immigrant, small business owners.

"Even on credit, it is too expensive for us," said Kuo, who owns a salon downtown. Kuo claimed that salons were being unfairly singled out.

"Some industries don't have to have wage bonds. What about restaurants? What about construction?"

Kuo also refuted the New York Times' claims that workers were paid only ten dollars a day, explaining that the ten dollars were for those in training. "It's like they are students. They can come when they want, go when they want. We have no power; ten dollars is basically lunch." 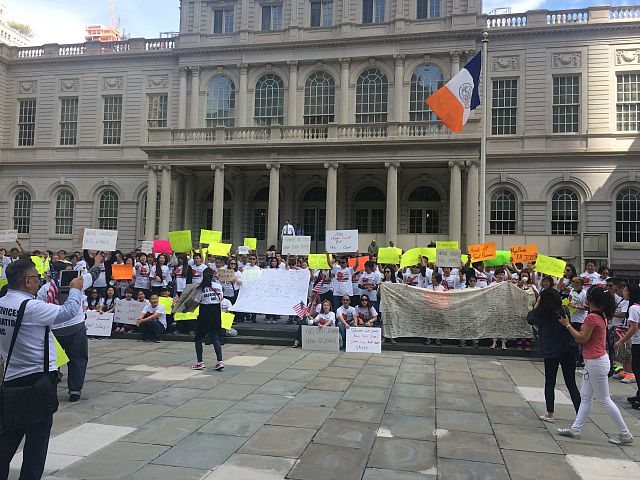 "A lot of businesses will close, and we will lose a lot of jobs. So I think this is not fair to our community small business community," Koo told the crowd, soliciting frequent hollers of approval. Koo then brought out City Councilman David Greenfield, representing Borough Park.

"What's really frustrating is that the people here are trying to live the American dream. They work hard, they play by the rules, and then the government comes in and tries to put you out of business," said Greenfield.

"The reality is that the overwhelming majority of folks who work in your industry are doing the right thing, and are following the rules, and are paying fair wages." 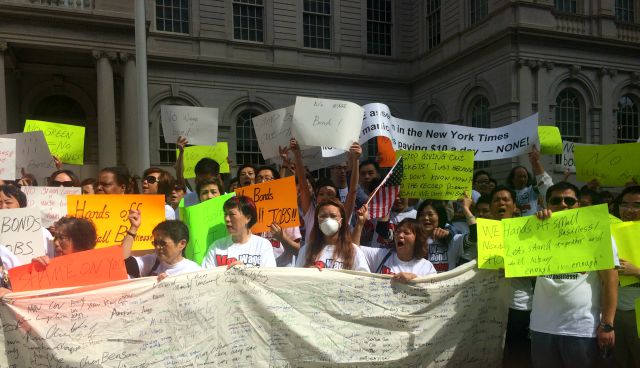 Behind the swarming crowd, the New York Healthy Nail Salons Coalition held a counter-protest. "The wage bond is critical to regaining wages," explained Charlene Obernaur, executive director of New York Committee for Occupational Safety & Health, one of the organizations under the Healthy Nail coalition. "In August, 42% had violations of wage per hour or overtime."

As for the economic frustrations of the nail salon owners who can't afford the wage bond, Obernaur says it's the cost of doing business.

"It comes out to 3 dollars per day for the entire salon. That's pennies on the manicure. It speaks to me that these folks don't care about their workers, the health of their workers."

At one point during the rally, Mayor Bill de Blasio came out of the hall to the roaring crowd, but walked quickly out to the street, ignoring the demonstration.

According to the New York Times, of the 1,188 wage bond applications received by businesses, only 18 have been denied.

#City hall
#governor cuomo
#nail salon
#workers' rights
#original
Do you know the scoop? Comment below or Send us a Tip