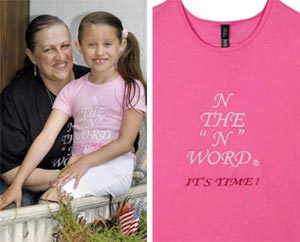 When 8-year-old Jaiden Haber appeared at her Amityville elementary school wearing a pink shirt reading "N the 'N-word'! It's Time!", Newsday reports she was sent to the principal's office and asked to change her shirt. Now, her mother and school officials disagree about whether or not an 8-year-old and her shirt should be what prompts dialogue on race.

The ACLU says students should be allowed to wear whatever they want (like that Staten Island kid who wore a confederate flag shirt), but the Amityville's district superintendent John Williams said, "To send a little white girl wearing this shirt into a very diverse district that is almost 90 percent nonwhite was not the way to address this word. It's a lightning rod."

Jaiden herself said, "My mom picked it out. She thought it would look nice on me. I don't know why they made me take it off." And her mother Karen Haber told Newsday, "I never expected it to be blown up like this. But innocently enough, Jaiden's made an impact on society -- maybe even history." However, Jaiden has also said she doesn't know what the N-word is, only that it's a bad word she shouldn't say (her mom says she wanted to keep Jaiden "innocent.")

#aclu
#amityville
#Jaiden Haber
#long island
#n-word
#what not to wear
#what to wear
Do you know the scoop? Comment below or Send us a Tip