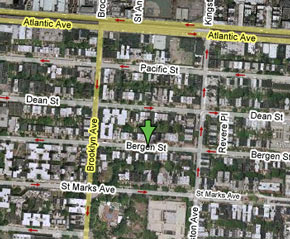 On Sunday, a Brooklyn woman who took in homeless men was found dead in her apartment. The Post reported that neighbors, who had not seen Young since Thursday, noticed a foul smell and eventually Geraldine Young's son found her "bloated and naked" body in a locked room. The ME's office's autopsy was inconclusive, and the police have yet to classify the death as a murder.

Young lived in a brownstone at 1274 Bergen Street and for the past two years, she used the top two floors as a boarding/halfway house called Gerry's House. According to the NY Times, four men were currently living there, and the Post said that one boarder had not been seen lately.

Today, the NY Times describes the mixed feelings about Young in her Crown Heights neighborhood. While some admired that she was trying to help the less fortunate by giving them a place to stay while they got back on their feet, others wondered if she was putting herself at risk. Her former pastor, the Reverend John Brown, told the Times, "I told her it’s not a good idea to be a lady by herself, just taking men in. She said, ‘I’m doing God’s work.’”

Another neighbor said, "We didn’t like her bringing undesirables, but there’s nothing we could do about it. You shouldn’t bring people like that into a brownstone. All the roofs are connected. She told me God told her to do it, and I don’t interfere with people and their God.”