On Tuesday morning, a talking animatronic Donald Trump Zoltar machine appeared on a Greenpoint street corner, drawing a bemused crowd with such sardonic utterances as, "Look into my crystal ball and see America's future. I see a huge investment into a modern, high speed rail system. Very advanced, very fast. And we're going to use it to deport 11 million illegal Mexicans."

After about 15 minutes, several unidentified men drove it away in a van, depositing it for brief periods of time at locations in Manhattan, including outside the Trump Tower and a Planned Parenthood center. Like the creators of the naked Trump statue that was suddenly unveiled in Union Square last month, the people behind The All Seeing Trump are cloaked in anonymity. But two of them agreed to speak with Gothamist by phone this morning; below is our (edited and condensed) exchange—followed by our interview with the Trump supporter whose company actually built the machine.

Do you have a name for yourselves as a collective? No, we're pretty highly unorganized over here.

Where did this idea come from? We were sitting around and watching the daily onslaught of soundbites and ridiculous, outrageous things that Trump had said. And you know, laughing about it and just remarking that this was not going to be funny if it actually came true. Basically, we wanted to sort of inspire people to think beyond the daily soundbite media circus of Trump stuff, and kind of project into the future and start thinking about what's going to happen if this guy actually ends up in office. Let's extrapolate upon the things that he's already said and let's just picture what that world was like. And when you do that, it's not entertaining, it's not funny. That sort of inspired the idea.

And yet the piece is very funny. Right. I think, just for engagement value and knowing our audience and having it out in public, I think it was important to kind of ride that line to have something that was entertaining but also scary as well.

How much did it cost? I don't think we want to disclose that. But I will tell you that it was all funded out of our own pockets.

Did you make it yourself or did you have to get an outside company? We started looking into it, once we came up with the concept, and we immediately started talking to various people, some friends of ours who are kind of in the film/television industry production side and pretty quickly found the company that actually makes these things, the actual Zoltar machines that you'll see at Pier 39 [in San Francisco] or Coney Island, called Characters Unlimited. They're in Nevada.

Who does the voice? The voice is Anthony Atamanuik. He's been doing these debates with another guy that does Bernie [Sanders].

His impersonation is so good. It got into in my head yesterday, some combination of the real Donald Trump and the All-Seeing Trump became a voice in my head and I was thinking in that voice all day. You relate? We had to get so deep into the cadence and the tone and the verbiage and the language of Donald Trump. One of the scariest things was actually sitting down and watching full Donald Trump rallies, not just the soundbites that most of us hear but actually sitting down and watching a 45-minute rambling, incoherent speech, if you can call it a speech. It sounded like a drunk man sitting on a bar stool next to you or something.

The funny thing is when we were writing the dialogue for this machine we realized that some of the things he said are actually crazier than the things we were writing. He kept out-crazying us, so we had to pivot and create new stories.

So all these messages are pre-recorded? It's not like [Anthony] is hiding in a van doing a live thing as people are approaching it? No, but that is technically possible. But currently we just have, I think we have, 32 individual misfortunes.

And you can sort of tailor them for the location I assume? Yeah, we've been doing that. We put a machine in front of a Muslim mosque with misfortunes that had to do with Syria and Isis and Muslim immigrants. We put it in front of Planned Parenthood, and we had a misfortune about shutting down Planned Parenthood. Other ones about calling women dogs. The Supreme Court nominations and things like that that would affect Planned Parenthood's future.

I love the red glowing eyes; that really takes it to another level. Yeah, there's a lot of little details that people miss. We took great care to add in all sorts of little Easter eggs and hidden references all throughout the machine. Even down to the "Made in China" sticker that's on the back of the machine which most people probably miss. There is a "Made in China" tag on his tie, and we put launch codes in his coat pocket. He's wearing Russian cufflinks. We've laid out some Polaroids in the way you'd see Tarot cards in the Zoltar machine, but they are some sort of salacious pictures of him and Ivanka and one of Chris Christie. 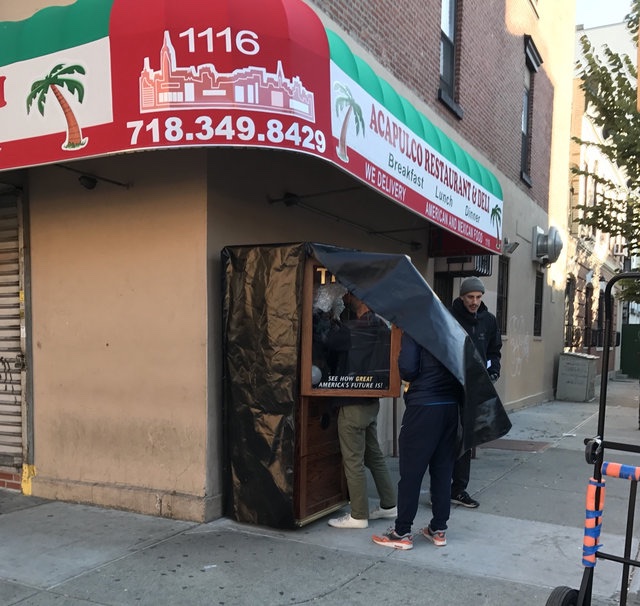 The All Seeing Trump in Greenpoint. (Camille Dodero)

Have you gotten any hostile reactions? Really no, actually. Our initial goal was just to get this thing completed and it was a labor of love, and then put it on the streets of New York and ultimately to bring it to Trump Tower. It happened so much more quickly than we expected. We have now brought it to Trump Tower and Trump International and the response has actually been amazing. And we kind of realized that we are preaching to the choir a little bit more than we expected in New York City. So now we are starting to pivot a little bit and think, what is the next step for this thing? What we'd really like to do now is bring it to the debate in Nevada and bring it into the lion's den, so to speak. So that's the next plan, is to figure out how to get this thing to Nevada.

That's a great idea. I don't know if you have any contacts to Mark Cuban, but we'd appreciate that. (Laughs)

Are you going to be out again in New York City today? And in the coming days? Yes.

The website for Characters Unlimited lists the price of a deluxe, animated character at $4,990. Reached by phone, company president Olaf Stanton said he charged about $9,000 for the Trump machine.

"The client that we did it for was very particular," Stanton said. "They were very concerned about every detail, from the hand being in the okay position, the smaller-than-life hands, the expression on the lips, the eagle on the shoulder was a custom-made thing we don't normally do."

As it happens, Stanton is a proud Trump supporter who will be voting for the Republican nominee in Nevada next month. Asked how he felt when he saw what the machine was being used for, Stanton said, "I have to put my beliefs aside and do what the customer wants. I think Mr. Trump would understand I'm a businessman trying to make a living. If someone wants to order a Hillary machine we're here to do that."