The Ghostbuster Ectoplasm dumpster photo taken by a concerned 14th Street resident may be more like Exorcist pea soup, but is in fact nevertheless greenish, despite denials from the MTA. It is also completely safe, according to the MTA and two scientists who specialize in concrete.

After Gothamist published a photo (above) of a dumpster filled with a bright green substance at the L train work site in the East Village, the MTA vigorously disputed the veracity of the image.

“There are color inaccuracies and shifts throughout the photo. These containers are holding cement, dirt, and water, which are the byproducts of jet grouting (injecting concrete into the ground to stabilize it), and the contents are the neutral color one would expect cement and dirt to be,“ MTA spokesperson Shams Tarek wrote in a statement.

The photo below, shot on November 29th, 2018 does indeed show a green hue on the side of the dumpster. 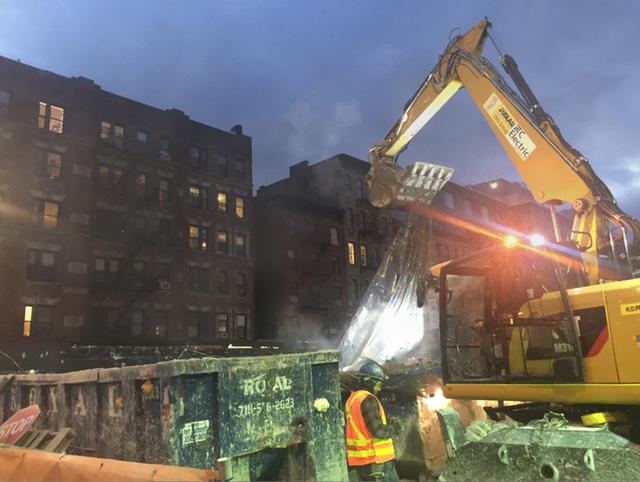 But a subsequent series of images sent to Gothamist over the weekend shows several dumpsters that begin with a mint-soup hue, and soon become more of a drab olive green. 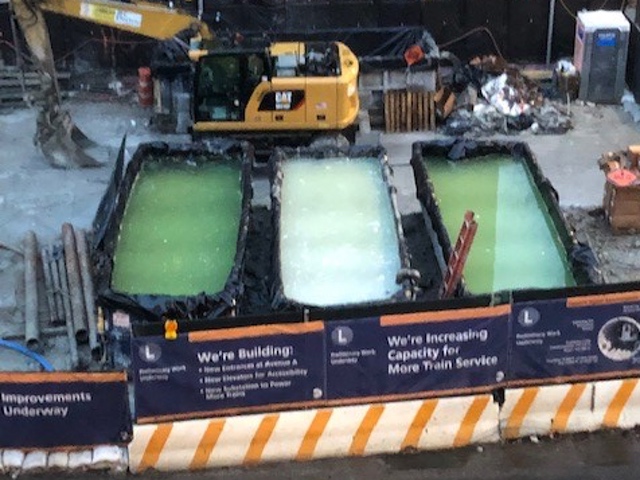 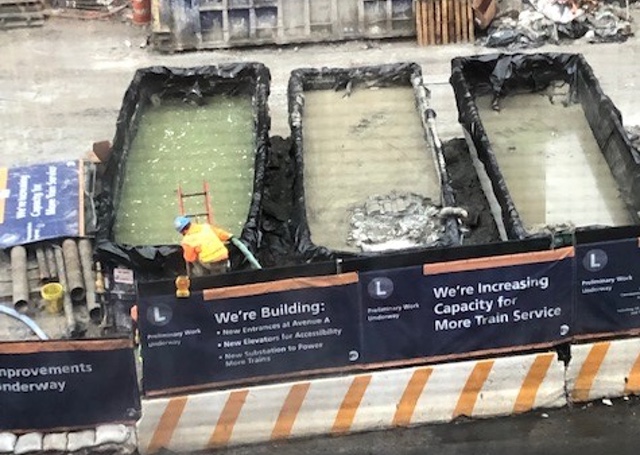 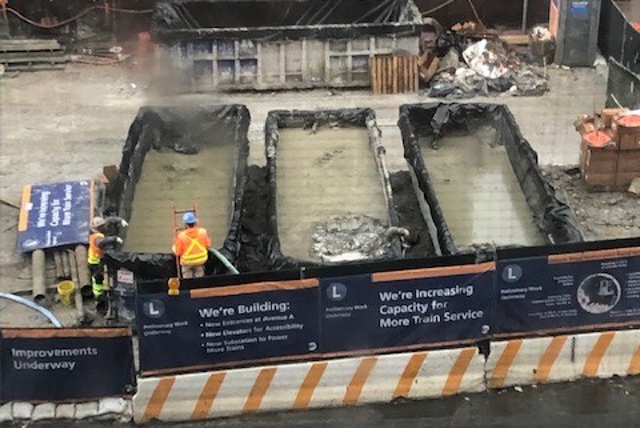 “The green that they pull out of the ground is sometimes like pea soup, and at other times is bright,” Alphabet City resident Patrick Ryan wrote. “The light above the dumpster in the photo in question is making the color more vivid, of course, but there it is. The presence of the green in the dumpsters is real and has been there, on and off, since the dumpsters started being filled.”

Julie Buffenbarger is a Senior Scientist and Sustainability Principal at Beton Consulting Engineers, which does not have any work currently with the MTA. She said a dumpster with green looking concrete is very normal. (Another concrete specialist who works for the Portland Cement Association agreed with this assessment.)

"You're used to seeing finished concreted, not the stuff in dumpsters," Buffenbarger said.

“You have to know what the materials are before you say it looks green, maybe it’s supposed to look green," she said.

She cautions against spending too much time studying the color on the top of the dumpsters because often that’s just a mixture of oil residues and whatever was left in the dumpster before.

Without having spoken to the contractors, she can’t say for certain, but suspects the MTA may be using slag cement, which has excellent hardening qualities and is low maintenance—“all things we like out of concrete”—but can appear green or bluish. And there are other factors that can affect the color of the concrete mixture—like the quality of the water and whether it’s potable or non-potable.

Buffenbarger says this reminds her of a project at the Canadian embassy in which the finished building appeared green, until the concrete took in a little sunlight and transformed to the desired white color.

#east village
#green
#green dumpsters
#l train
#mystery solved
#we the commuters
#original
Do you know the scoop? Comment below or Send us a Tip