As the ones who first reported on the mysterious tall bench on the median of East Houston Street, we feel some responsibility in bringing closure to the story. (fYI amNY: Link.) Contrary to some of the comments in our original post claiming that the bench was just an amateurish photoshop gag, it turns out the surreal furniture was real, quite real. And now it is quite gone.

We spoke to Ted Timbers at the DOT today, who confirmed that the bench has been removed and is being held at a DOT facility. They have no clue what giant artist bolted it into the median or what it was supposed to represent, but it’s now a thing of the past. Rumors about a new Duane Reade planned for the median remain unconfirmed.

The DOT is urging the owner of the bench to call (212) 487-8341 and come in to claim their handiwork - no hard feelings! We asked Timbers if the bench-maker had violated any laws by bolting furniture into the median, and were told, "Possibly... I'll have to check on that." Hmm… We wonder if they’re also promising the owner some Ozzy Osbourne tickets to further entice him to come get it.

Photo by Patrick Verel, who tipped us on this. Curbed has a photo of the now sad, barren median and a sign posted by the DOT.

UPDATE: Suckapants reveals today that the sculpture is by the notorious streetartist Brad Downey:

Downey was in town for a flash recently, but long enough to team up with Mike Wrobel to make and install an 8 ft. high bench on the Lower East Side of Manhattan. He asked me to document it for him, since the lifespan of this type of work is always questionable. Soon after I took these photos, the piece was removed by the DOT. But only after it made the news... The DOT was nice enough to post flyers notifying the owner of the piece that they could come claim the work within 48 hours, before they scrapped it. I'm sure there wouldn't be any NYPD representatives present if someone did in fact show up to claim it, none at all. . .

Here's a picture of Downey installing the sculpture: 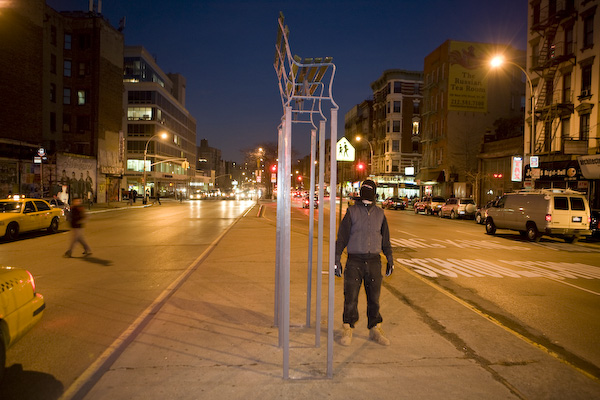 And for more about the man behind the camera, check out our in-depth interview with Tod Seelie (AKA Suckapants).