Fariha Nizam, a 19-year-old college student from Bellerose, Queens, was taking the Q43 bus en route to her Manhattan internship on Thursday morning when she says a white, middle-aged couple approached her, yelling that she must take off her hijab.

"The woman was doing most of the talking and she was basically telling me that I wasn't allowed to wear it," Nizam told us on Friday, three days after Donald Trump, a candidate who has stoked Islamophobia and called for a ban on Muslims, was elected President. "She was telling me to take that disgusting piece of cloth off of my head, telling me it's not allowed anymore."

Nizam, whose parents immigrated from Bangladesh in the 1990s, has lived in Bellerose her whole life, and has commuted on the Q43 bus since high school. "I've been taking it forever: for high school, for college, for work," she said. "I've always been taking that bus and nothing has ever happened to me before."

According to Nizam, there were about ten other commuters on the bus, many of whom spoke up, telling the couple to stop. This, she said, prompted the woman to approach her and touch her head. She continued:

Other people were telling them to stop and leave me alone, and they kind of got in a fight. She was screaming, "No she has to fucking take it off."

The more she was fighting with them the angrier she got and because of that I assume she came towards me and started grabbing at my head and tried it pull it off. And I completely started bawling and I started freaking out. And I finally was able to breath properly and I got up and got off of the bus and walked back home and let my internship know I couldn't make it.

Nizam recounted the incident on Facebook, in a post that has been "liked" over two thousand times since. Though she still plans to contact the police, yesterday, she said, she was "too distraught."

"I wish I didn't respond so weakly, but I hope, God forbid, if this happens again I won't break down the way I did," Nizam added.

Nizam's account is "not unusual," said Etzion Neuer, policy director for the Anti-Defamation League. "While the specifics are unique, broadly speaking there are a lot of pieces here that are commonly shared by victims of incidents of hate. Often, people don't respond in the way they would have liked to."

"Someone will say, 'Why didn't you say this or do that?' And it's simply not fair. Because the moment is so shocking and emotionally wrenching, that their rational faculties don't take over and they don't know how to respond."

Still, Neuer urged victims to go to the police as soon as they are able. In his experience, he said, the NYPD's Hate Crimes Taskforce is "extraordinary."

But Debjani Roy, deputy director at the anti-harassment nonprofit Hollaback!, said Friday that many women don't feel comfortable contacting the police. Taking this into account, she said, there's plenty that New Yorkers can do if they witness a hate incident unfolding. "What we have always pushed for as an organization, and is more important now than ever, is bystander intervention," she said. "We have a role to play as community members to support and help provide some sense of safety for people who are directly targeted."

Hollaback! has developed what they refer to has the "Four D's Of Bystander Intervention": directly intervene, distract, delegate, and delay.

If stepping between victim and harasser "isn't the safest thing to do," Roy said, distraction is a good alternative. "That could be pretending you are lost and asking for directions, or sitting next to the person and pretending you know them," she said. "Then the person who is doing the harassing is disrupted." Delegating might involve getting up and speaking to the bus driver. The fourth response, "delay," might involve stepping up to the victim and talking to him or her after the incident.

In Nizam's case, she said, fellow bus riders could have done more. "As much as I appreciate that people were asking [the couple] to stop, I wish there was more of an active effort. There wasn't someone literally getting between me and this woman," she said. "I didn't see anyone telling the bus driver he needed to stop, or calling the police."

The MTA didn't respond to a request for comment. 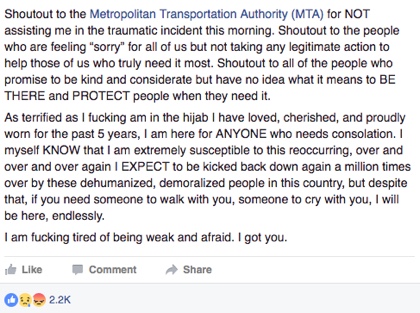 Dr. Debbie Almontaser is board president of the Muslim Community Network, a social justice nonprofit organizing Muslim New Yorkers that was founded in 2003, in response to "urgent needs" following 9/11.

She said on Friday that the precautionary measures she's urging Muslim New Yorkers to take this week are the same ones she's been pushing for the last six months, as the presidential election drew to a close, and, particularly, since an Imam and his assistant were fatally shot in the head in Queens in August.

"Right now my advice to Muslim Americans is to be vigilant, to be careful where they are going," she said. "Consider what time of day they go out, what neighborhoods they are in, and really try to travel with other people. Try to not be out late... really try not to be on [your] phones, which could be a distraction."

"I've been telling people, 'If you need someone to walk with you I will,'" Nizam said. "But it's just scary because I myself am susceptible... I am going from being super angry, to distraught and in agony."

On Facebook, she reiterated her resolve to support others. "As terrified as I fucking am in the hijab I have loved, cherished, and proudly worn for the past 5 years, I am here for ANYONE who needs consolation," she said.

The NYC Human Rights Commission enforces the NYC Human Rights law, which protects individuals against discriminatory harassment. However a spokesperson clarified on Friday that protections typically apply to repeated instances of alleged abuse—say, walking by the same deli each morning and enduring repeated harassment from a regular customer.

"If anyone believes they have been the victim of discrimination, including repeated verbal harassment, we urge them to call the 311 and ask for Human Rights," said spokesman Seth Hoy. "If anyone is in immediate danger of violence, they should call 911."

Hollaback! has more detailed advice on how to respond to harassment, either as a victim or a witness, here. Here's one Paris-based illustrator's guide for bystanders, and another reminder that intervention and action is essential.

#assault
#Bangladeshi
#bus
#harassment
#hijab
#MTA
#queens
#trump
#original
Do you know the scoop? Comment below or Send us a Tip