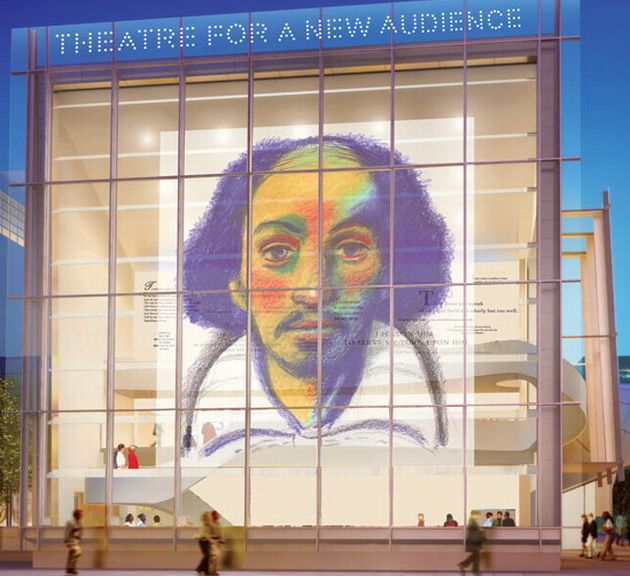 In 2004, Mayor Bloomberg agreed to set aside property in Fort Greene for the construction of a $48.5 million, 299-seat classical theater (above) designed by Frank Gehry and Hugh Hardy for Theater for a New Audience. The itinerant company has not had a permanent home since it started in 1979; the glassy new building would be built on city-owned land in Fort Greene opposite the Brooklyn Academy of Music, in a planned BAM “Cultural District.”

Well, as Atlantic Yards developer Bruce Ratner might privately admit, stuff happens: In 2006, the proposed site of the not-yet-built theater was moved to a lot across the street, on the corner of Ashland Place and Lafayette Avenue. Now the Sun reports that the theater will shuffle down the block so the city can use the site for affordable housing. The laid back founder of the company, Jeffrey Horowitz, tells the Times, “You have to swing with the punches,” and says that $44 million has already been raised for the theater – all they need is a place to put it. (You can help them raise that extra $4.5 million at a rooftop fundraiser party tomorrow night.)

It was also revealed yesterday that the planned public library designed by Enrique Norten that was to have risen next to BAM has been aborted due to lack of funds. Instead, Two Trees Management is finalizing a deal to buy the land from the city for $20 million and build a mixed-used facility designed by the same architect. Initial plans propose 180 housing units, 187,000 square feet of commercial space, and performance space for Brooklyn-based arts organizations; City Council Member Letitia James tells the Sun she’s withholding support until Two Trees includes affordable housing in their proposal.