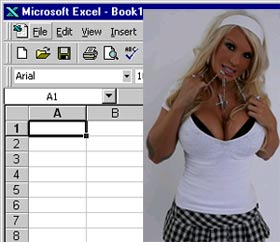 Okay, not all the details of East Side madam Kristin Davis's black book are revealed, but quite a few are highlighted in the Daily News today. Davis, busted earlier this week for running a prostitution ring in Manhattan apartments, reportedly has the "largest black book in America."

In reality, the black book is actually a computer spread sheet that "logs more than $1.1 million in business" from a variety of men, some of whom gave their real names, numbers and credit card information. Here are some of Davis's notes:

This guy's blacklisted! Violent & scary. Don't ever send a girl to him." - Christopher goes from the black book to the blacklist after a bad date in May 2007.

"Marriott Hotel Room 1006. Discretion very important with this man." - Mark paid $3,000 in hopes that his name would never be made public.

"Mark left since he didn't like place. Mention this to him if he books again. Beggars can't be choosers, [expletive] ..." - Another john goes from the black book to the blacklist.

A 30-minute body rub (with happy ending) could cost $160, while Davis would charge thousands for threesomes. However, the News points out that there's no evidence ex-governor Eliot Spitzer is linked to Davis' Wicked Models ring.

Someone who is linked to Davis seems to be Washingtonienne Jessica Cutler, whose photograph is on Davis's MySpace page, captioned as Jessica Cutler...and the same photograph appears on the Wicked Models website. Cutler, whose old blog detailed having sex with married Bush officials while working as a mail clerk for then-Senator Mark DeWine, told the Post she did party and live with Davis at one time. Now the NYPD wants to talk to her.