The slaying of a mob boss in front of his Staten Island home has raised concerns about a potential mob war, as reports suggest that a fake car crash may have prompted Frank Cali to inspect his SUV, which was parked outside.

Police found Cali, 53, outside 25 Hilltop Terrace mansion with gunshot wounds to his body after 9 p.m. on Wednesday night. Cali was taken to Staten Island University Hospital, where he was pronounced dead.

A pick-up truck driver had crashed into Cali's Cadillac Escalade, the Daily News reports: "Video surveillance shows Cali briefly talking to a man who jumped out the truck — until a muzzle flash and a barrage of shots sent the old-school wiseguy desperately scrambling for cover underneath his Cadillac."

The Daily Beast has more details about the moments leading up to the fatal shooting:

The video, as described to The Daily Beast by a law enforcement official who has seen it, then shows Cali pausing to close his front door, perhaps out of concern for his family inside, or maybe just to ensure a dog or a cat does not get out. He steps over to the driver of the pickup truck.

The driver is wearing a hoodie and a baseball cap, so his face is not clearly visible as he and Cali speak. Cali reaches into his pants pocket, as if to suggest he had a gun.

The driver then bends down and picks up the license plate. He holds it out to Cali, who takes it and steps over to the rear of the SUV.

Cali has his back to the driver as he puts the license plate into the rear compartment of his SUV. The driver chooses this moment to produce a gun and shoots Cali.

Cali goes down. The driver stands over Cali, firing again and again, as if to make absolutely sure his victim is dead. His face remains obscure, but the muzzle flashes are unmistakable.

A neighbor described the aftermath, "I looked out and saw a blue pickup zoom past my house and fly off the block. I looked back and saw a guy and woman screaming. I ran back inside." 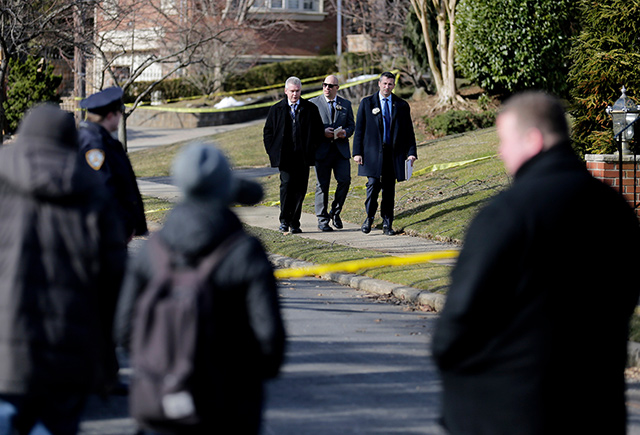 It's believed the gunman is between 25 and 40 years old. Chief of Detectives Dermot Shea said on Thursday, “Certainly Mr. Cali's prior dealings — he has been arrested prior by the feds — are a focal point at this point of the investigation. We are ruling nothing out at this point."

Investigators are reportedly looking at whether another member of the Gambino family is involved: The
The NY Post reports that an "internal war for control" may have been unleashed, with "one of John Gotti’s brothers and a key associate fresh out of prison and possibly looking to seize power."

In speaking to the News, a police source said of Gene Gotti, 73, "It’s total speculation. But it’s also something to look out for. Was Gene trying to reclaim some of his business and Cali wasn’t going for it?"

Another source pointed out that the hit evoked one that John Gotti authorized, "It’s in [Gene Gotti's] bloodline. This is very similar in some ways to what happened to Paul Castellano in front of Sparks Steak House."

Retired Chief of Detectives Robert Boyce told the Post, "This was in front of his family, in his house. You don’t usually see this. There were other places this could’ve happened."

#frank cali
#gambino
#gene gotti
#mafia
#mob
#staten island
Do you know the scoop? Comment below or Send us a Tip