Murder Suspect's Parents Believe She Was Set Up 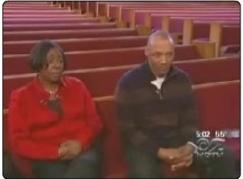 Parents of the woman accused of killing real estate broker to the stars Linda Stein have been championing her innocence to news stations. Natavia Lowery's mother Lottie Lowery-Walsh and her stepfather Daniel Walsh spoke to WCBS 2 and WABC 7 about the 26-year-old's inability to have committed a crime.

Lowery, who is being held without bail at Rikers, is accused of bludgeoning Stern to death in her Fifth Avenue apartment. Police claim that Lowery confessed to the crime, which was prompted by Stein's abusive behavior. But Lowery's defense lawyer has said the police coerced the confession during a marathon questioning where the police denied her request for a lawyer.

Lowery's mother said, "There is no doubt in my mind" that her daughter is innocent. "That girl can't even clean her room, more or less a crime scene." She added, "They needed a scapegoat – they needed a little black girl and that's what they went after: the little black girl." And Walsh said, "I'm getting the impression very early on that they're giving the appearance of justice, but it isn't a level playing field."

The trial is not expected to begin until the fall. WCBS says Lowery, who is pregnant, will probably be a mother by then.

#coerced confession
#crime
#Linda Stein
#murder
#Natavia Lowery
#rikers
#scapegoat
Do you know the scoop? Comment below or Send us a Tip