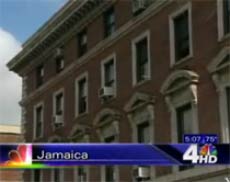 The police are still looking for a man who escaped the 103rd Precinct during questioning yesterday afternoon. WNBC reports that Maxie Dacosta Jr. was about to be charged in a murder when he jumped out of the third floor window at the Jamaica, Queens precinct. He was apparently left alone in the interview room, got out of his handcuffs, and decided the window was the only way out.

From the window, he jumped onto a neighboring building. Police is searching the area to find Dacosta, a 27-year-old black male, who is 6'1" and wearing blue jeans and a black hat; he may also be injured. Jamaica residents are worried; one woman told WNBC, "My mom didn't want me to come out tonight because she's scared. Some guy who is capable of escaping the precinct, he's capable of anything."

According to the Post, this is the second time in three months a suspect has escaped police custody; in 2004, 12 suspects escapes while 23 escaped in 2005. And when one witness asked the police what was going on, she said an officer told her, "You don't want to know. Something really bad.''

#crime
#interview
#Jr.
#murder
#police
#queens
#The Police
#wnbc
Do you know the scoop? Comment below or Send us a Tip