Murder Rates Look to be Lower for 2007 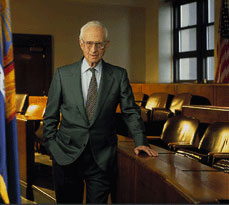 New York City is getting safer and safer. Well, at least Manhattan is. Manhattan District Attorney Robert Morgenthau told reporters yesterday that there have only been 65 murders in the borough this year, down 40% from last year. When Morgenthau took office in 1975, the borough had 648 murders, accounting for almost 40% of the city's total. The 65 homicides this year account for just 14% of the city total. The 88-year-old DA attributed the drop to "excellent work done by the police and prosecutors." Police stats project the entire city with 500 fewer murders this year, the lowest number since 1963.

Another figure that Morgenthau was proud of was the increased revenue his office brought in - a statistic you might not think of when it comes to a DA's office. With violent crime down, the office has had more time to focus on white-collar crime. In 2007, his office collected $43 million for the city and state in criminal fines, forfeitures, and back taxes. That number is expected to jump in 2008 when $105 million in fines from the Tyco International case is officially recorded.

And any question of whether Morgenthau will retire early may be premature because the octogenarian says he's too old to retire! "My grandfather used to say, you know, opportunity knocks at everybody’s door at least once. The trick is to recognize the knock. So the opportunity to retire knocked on my door and I missed it." The DA wouldn't tell reporters whether he would be running for another term in 2009 when he turns 90. On hand for Morgenthau's meeting with reporters was his 17-year-old daughter (yes, 17 - you do the math) who was just "was just checking up" on him. Morgenthau also has no major concerns about his health, relaying advice from his doctor, "My doctor has told me I can do anything I want to do, except fall down. He’s forbidden me to fall down."