Photographs of National Security Guard commandos being lowered to and standing outside the Nariman Bhavan, the Jewish center targeted in the Mumbai terror attacks, from the AP 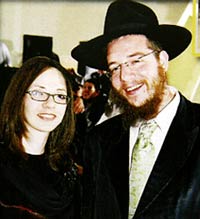 Yesterday, it was reported that Brooklyn Rabbi Gavriel Holtzberg and his wife Rivka (pictured, left) "are among the westerners taken hostage at the Mumbai headquarters of the New York-based outreach group Chabad Lubavitch" during Wednesday's terror attacks in Mumbai, India. Terrorist gunmen had entered the Chabad house, and reportedly took a number of people hostage. Commandoes just stormed the building, and CNN-IBN reports that "5 hostages killed at Mumbai Jewish center." (More details on the raid at the Times of India.)

It's believed that the Holtzbergs' 2-year-old toddler Moishe was rescued. Their nanny, who managed to get out, said, "It was terrible. There were explosions everywhere, gunfire - they tried to shoot me."

The NY Times says Rabbi Gavriel and Rivka Holtzberg moved to Mumbai in 2003, when they were "barely out of their teens," "to manage a mix of educational center, synagogue and social hall known as a Chabad house, one of about 3,500 outposts around the world run by the Lubavitch Hasidic movement.The place soon became a year-round magnet for Israeli backpackers and the Jewish businessmen and tourists who flock to Mumbai, as well as for the Iraqi and Indian Jews who live there."

Both were born in Israel, but Gavriel Holtzberg was raised in Crown Heights, Brooklyn. His mother Freida told the Daily News yesterday, "I don't know what is going on inside the building All the lines of communication have been cut off. I haven't heard his voice since last week. I don't know if my son is alive. I don't know anything."

The fighting continues in Mumbai; the death toll is currently at 143, with hundreds injured.

Update: The Chabad-Lubavitch Movement has confirmed that Rabbi Gavriel and Rivka Holtzberg were killed.

#chabad house
#india
#mumbai
#Rabbi Gavriel Holtzberg
#Rivka Holtzberg
#terrorist attacks
Do you know the scoop? Comment below or Send us a Tip