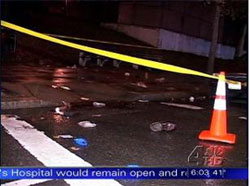 Earlier this year, subway conductor Maurice Parks was coming off his shift when he was attacked by a group of men in Harlem. A skilled martial arts experts, Parks managed to defend himself and in the frenzy, stabbed someone he thought was an attacker--but it turned out to be a bystander who may have been trying to help. Now Parks has been arrested and charged with the bystander's murder.

The NYPD spokesman Paul Browne said, "In this case, it was an arrest following an indictment by a grand jury." Apparently, it's believed that Parks, who had a knife on him, stabbed bystander Flonarza Byas when "Byas was trying to flee." Initially, the police believed Byas's death was the result of self-defense, but the grand jury decided to indict Parks.

A Daily News source said "the grand jury may have been swayed by the revelation there was a brief gap between the time Parks was jumped and the moment Byas was stabbed," and apparently witnesses said Byas may never have been near the group, "Nobody saw that Byas ever went to Parks." When told of Parks's indictment, one of the attackers' lawyers said, "He was charged with murder? Wow. I'm surprised they made this decision."

Parks's arraignment was postponed till next week, because he did not have a lawyer yet.

#bystander
#harlem
#Maurice Parks
#mugging
#mugging victim
#murder
Do you know the scoop? Comment below or Send us a Tip