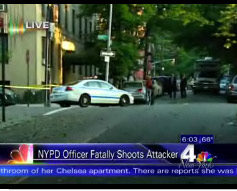 An attempted mugging proved fatal for the attacker late yesterday evening, as a man followed a woman and her three-year-old child into their building shortly before midnight Saturday. The mugger apparently did not know that the pair's husband and father was a NYPD officer who was off-duty at the time. When the man attacked the woman and brandished a gun after they get off the elevator on the 3rd floor, the mother screamed. Her husband rushed from their apartment and shot the mugger once in the torso--a wound which was fatal.

A fourth man who accompanied the trio in the Bedford Park, Bronx building's elevator said that the man seemed very serious and was trying to hide his face with a hat. According to investigators, the cop only returned fire after the mugger shot at him once and missed. Mortally wounded, the attacker fled from the building and had the presence of mind to ditch his gun in the wheel well of a nearby parked car before collapsing. He later died at the Montefiore Medical Center.

The Daily News points out that the unsuccessful mugger was the fourth person to be shot by a police officer this week.

#bronx
#child
#montefiore
#mother
#mugger
#nypd
#off-duty
#officer
#shooting
Do you know the scoop? Comment below or Send us a Tip