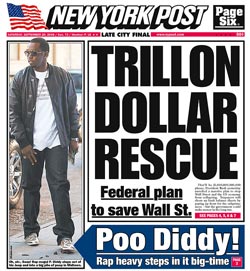 Perhaps Post editors decided we needed a shot of levity as we worry about the economy, so they go with a "POO DIDDY" cover headline and then DIDDY THE CRAP STAR for the article. The moniker "P. Doody" is also offered.

The multi-tasking mogul who is also known as Sean Combs stepped into the offending dog poop at West 44th Street between 8th and 9th Avenues. One worker told the Post, "He stepped right out the Jeep and right into it, and he wasn't happy. It was hysterical."

Apparently he was very aware of the attention his not-watching -where-he -walks ways: "After spotting lensmen snapping photos of his embarrassing predicament, Combs asked them not to publish their shots."

Earlier this year, the city raised fines for not picking up dog poop to $100. And the blog New York Shitty covers egregious non-scoop behavior.

#dog poo
#dog poop
#dog shit
#P. Diddy
#poo
#poop. no scoop
#Sean Combs
Do you know the scoop? Comment below or Send us a Tip