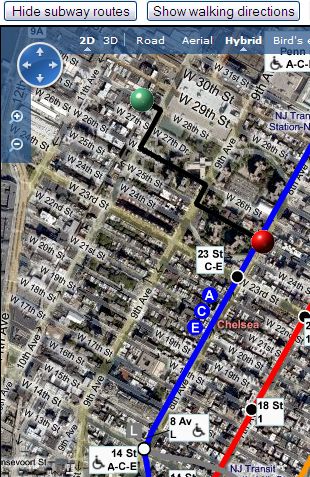 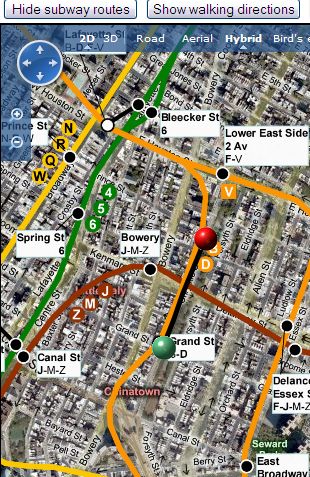 Starting point map and destination point map viewed side by side on the MTA Trip Planner website.

Anyone trying to plot the best subway route to serve their departure and destination points has long since given up on the MTA website, which for years has mostly confined itself to below-ground mapping and shown a remarkable disregard for how the subway actually corresponds with the street level. Sites such as Hopstop and OnNYturf have sprung up to fill the void with integrated mapping, but now they’ve got competition from some new improvements on the NYC Transit website.

Believe it or not, the MTA site – the Charlie Brown of municipal websites – finally did something right for a change. Trip Planner is now a much more user-friendly way of mapping your trip from point to point, with a variety of routes and options that enable you to minimize transfers, walking distance or avoid the bus. There is a map with multiple views (2D, 3D, hybrid) for each route plotted, total travel time estimates and walking directions.

Here’s a common scenario: You and your crew are striking out at Mansion just like when it was Crobar, but your boy at The Box says it’s totally on. Thing is, your H2 is currently getting mad pimped at a body shop in Hoboken and these aggro cab drivers won’t let all six of you pile in, and now these crybabies you call friends are starting to whine about going home. Don’t sweat it, brah – just log onto Trip Planner with your B. Berry and plot the best route, depicted above. Bam! The beat goes on in less than 45 minutes, and you’re the big hero. (Thanks MTA!)

There are still some things that could use tweaking; for one thing it doesn’t seem possible to see the map of your entire trip in one view – you have to click back and forth between the departure and destination maps. But still, by NYC Transit standards this is quite a leap into the 21st century.

#charlie brown
#How to get to
#map
#MTA
#nyc
#nyc transit
#Second Avenue
#Second Avenue Sagas
#subway
#the box
#transit
#Trip Planner
Do you know the scoop? Comment below or Send us a Tip