On Friday at noon, the MTA says OMNY readers will go live at 16 stations along the 4,5, and 6 line from Grand Central Terminal to Barclays Center in Brooklyn, signalling the official beginning of the end of the MetroCard.

Riders will be able to use a contactless credit card or smart phone with a mobile wallet to buy a single ride, by tapping their card or device at the turnstile reader at select stations. All Staten Island buses will have OMNY readers, too.

The MTA considers the rollout a pilot program because of the limited locations and functionality. Commuters won’t be able to use weekly or monthly cards until the whole system goes live with OMNY in October, 2020. For riders who don’t want to use, or do not have, a credit card or smart phone, there will be smart cards for sale.

Wayne Lydon, director of the MTA’s Fare Payment Programs, said the MTA was rolling it out slowly so it can check for any hiccups, whether it's the miles of new fiber optic wire connecting every station or the new readers themselves.

"We want to make sure that we have all of that completely under control before launching this on the entire system," he said.

He also doesn’t want what happened in Chicago when it rolled out its new fare payment system to happen here. In 2013, when the Ventra card launched, Chicago call centers were overwhelmed. Some people received no cards while others got too many. And some human resource departments got access to other companies’ employee information.

The MTA said none of that will happen here. Mostly because the MTA’s call centers and OMNY websites with detailed FAQ sections are already up and running. The pilot won’t involve any physical cards from the MTA. And the pre-tax benefits won’t be functional during the pilot.

But the same company behind the Chicago system, Cubic, won the MTA contract to launch OMNY. (They created the MetroCard as well.)

“The Chicago fare payment system has become one of the most successful in the country—winning industry awards, integrating three regional transit agencies and serving over five million people,” Steve Brunner, vice president and general manager of the tri-state region with Cubic, wrote in a statement. “In New York, we’re applying the formula we successfully leveraged in London to deliver a user-friendly and efficient system that will help get New Yorkers where they want to go more seamlessly than ever.”

So, the MTA and Cubic officials are confident there won't be any Chicago-style problems here. New York City commuters are less sure.

"Not based on my experience with the MTA,” commuter Amy Schaefer said. “There hasn't been anything that's been a crowning success."

Standing in front of an OMNY reader, she said she wants it to work: "I'm into technology in the sense of making life a little easier and faster as long as it's safe and identity protected and all of that."

Unlike the token or subway card, this will be a much more connected system. Riders will be able to register an account with the MTA where they can see their ride history, make payments or dispute charges. But there’s nothing on there about how the MTA or Cubic plans to protect user’s data.

Earlier this year, Crissy Ditmore, the director of strategy for Cubic, spoke at a trade fair on a panel with New York City Transit President Andy Byford. When asked by the moderator how Cubic protected users’ privacy, she skirted the question.

"Anyone that owns a cell phone... your personal information, your data, your movements your shopping everything [is being sent] to someone already. The reality is that ship has sailed, in the U.S.," Ditmore said.

For more, listen to reporter Stephen Nessen's story for WNYC:

Cubic and the MTA didn't reply to questions about how it plans to protect user data collected through OMNY.

“Questions remain unanswered about how OMNY will collect, analyze, and retain our location and banking data,” Cahn wrote in a statement. “The MTA has told us that OMNY will track New Yorkers, but it hasn’t told us how that information will be safeguarded or when it will be shared with local, state, and even federal law enforcement. Until we have real privacy protections, OMNY will be another stop on the train ride to the surveillance state.” 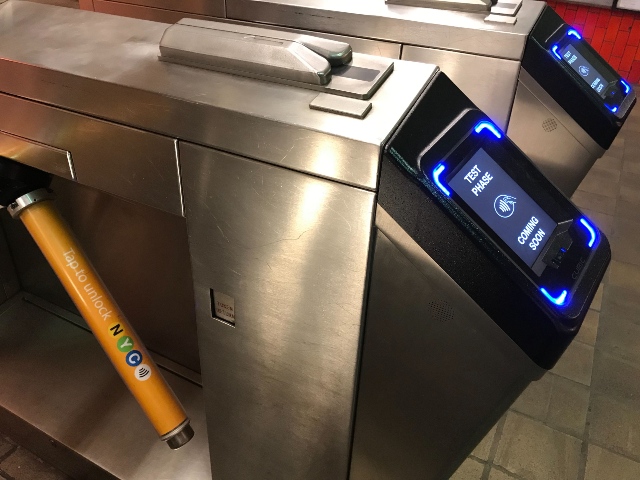 As for protecting the actual OMNY readers from the public in New York’s notoriously harsh environment, Lydon said the MTA did rigorous testing.

"If you purposely try to vandalize it I don't think you're going to be very successful unless you took something like a ball peen hammer,” he said “Certainly, it’s glass and it could be broken if you make some effort."

He said some of the readers have been defaced with graffiti already, which stations crews removed.

“We know that our equipment has to be resilient and vandal proof and graffiti proof to the extent possible,” Lydon said.

The new readers will certainly bring an end to the notorious failed swipe, and all the embarrassment that goes with that, Lydon said. He expects 30 commuters a minute to pass will be able to pass through an OMNY turnstile, roughly the same number of commuters that swipe through now.

"I think it's refreshing,” said Mitchell Moss, director of the NYU Rudin Center for Transportation. "Having something modern in this century-old technology called the subway is going to be something people can like and enjoy."

But for those commuters who want to hold onto their MetroCards, the MTA plans to keep them available until the summer of 2023.