Express buses are late thirty percent of the time, according to Comptroller Scott Stringer's audit [PDF] of the city's express bus service, which he presented outside of city hall this morning.

Speaking in front of members of the Straphangers Alliance and Riders Alliance, Stringer detailed his office's findings, based off of monitoring the first and last stops on 12 different express bus routes during both morning and afternoon rush hour, between October and December 2013.

The worst performance in all five boroughs was documented along bus lines that serve Brooklyn and Staten Island, where many neighborhoods are poorly served by the trains. For example, Staten Island's X1 and X17 buses had the worst performance overall, leaving late or arriving early an average 35.9 percent of the time. The BM1, X27 and X28 buses, which serve Mill Basin, Bay Ridge and Bensonhurst respectively, were off their mark an average of 35.9 percent of the time. Comptroller Stringer said, “When one out of every three buses is not on time, it impacts every borough and hits at our City’s economic competitiveness."

John Raskin of the Riders Alliance added, "“Express buses serve the people who need reliable public transit the most: residents of the boroughs, far from the city’s core, who have few other options for how to get to work."

Soon after the audit was announced in 2013, the MTA established a new system for tracking complaints from bus customers. Last April, they introduced the Customer Relationship Management (CRM) system, which, according to the audit, "will allow the agency to better identify persistent service issues... and address them in a timely manner."

For commiseration purposes, here's the audit's breakdown of top ten customer complaints, documented using CRM. Note that the vast majority of complaints are due to lateness and delays. 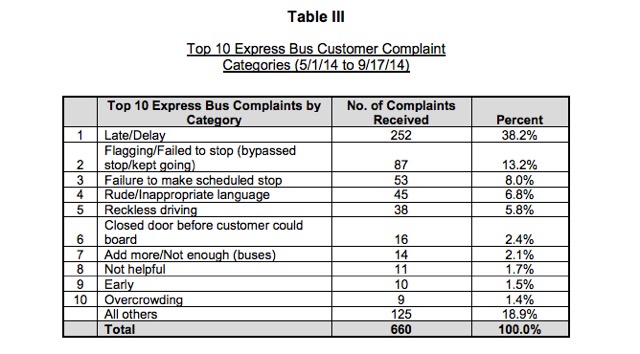 Office of the Comptroller

The audit also notes that the MTA implemented a bus-tracking computer program last May. Called, appropriately, Bus Trek, the program uses GPS-generated data to track all of its regular and express buses in real time. However, the MTA has yet to set any performance goals when it comes to timeliness, much less announce their progress to the public—both suggestions outlined in the audit.

In response to the audit, the MTA said that they don't see the value in publicly announcing their progress when it comes to overall bus timelines. Instead, they argue, they should focus on how long customers are forced to wait in the whipping wind/beating sun. The MTA issued the following statement this afternoon:

Wait assessment is what we will continue to focus on... because customers generally arrive at their boarding locations at a continuous rate, and their primary concern is that we have even service, not if specific buses are meeting their scheduled times. In addition, there are other extraneous factors such as traffic and road conditions that we unfortunately have no control over.

Other suggestions, which the MTA agreed to pursue, include continuing to use Bus Trek to "modify and improve express bus schedules," implement regular safety checks of wheelchair lifts in buses, and continue using CRM to track complaints.

This afternoon, the MTA also made a point of reminding us about the MTA Bus Time app, which was introduced last April. This, they said in a statement, gives customers "real-time information on every bus and every route on their cell phone, tablet, or computer," and helps them "save time by going to the stop when they know that a bus is approaching."

Meanwhile, at last week's Department of Transportation City Council meeting, Councilmembers voted in favor of a bill that will require the DOT to develop a plan for Bus Rapid Transit (BRT) across the five boroughs. According to a press release from the City Council, BRT is an "innovative transit solution" that combines "the performance, speed, and reliability of rail, with the flexibility and substantially lower cost of buses." In other words, bus-only lanes, elevated boarding stations, pre-pay kiosks, and timed traffic lights. (The release posits that NYC’s existing “Select Bus Service” routes "include some - but not all - of the elements of full BRT.")

The new bill calls on the DOT to determine which underserved neighborhoods are in most dire need of BRT, and estimate how much capital money these new routes would call for over the course of the next decade. Let's just not forget that BRT, like SBS and the express buses, will be vying for a piece of that meager capital budget pie.

#Comptroller Stringer
#express bus
#MTA
Do you know the scoop? Comment below or Send us a Tip