Lhota's boss, Governor Cuomo, also stressed the need for more quality-of-life enforcement underground. "The MTA needs the NYPD to be enforcing the laws in the subway system and be present," Cuomo said at an Association for a Better New York breakfast. "Public safety is important. The quality of life crimes are important. Littering... starts fires on the track and it is dangerous and we need the NYPD to step up and do that role."

Public defenders said Tuesday that while littering summonses are currently infrequent, the MTA's new plan could have serious consequences.

"I'm all for politeness and courtesy and respect, but when you try to legislate those things there's always a fear that it's not being applied fairly or equally," said Tim Rountree, Attorney-in-Charge of the Legal Aid Society's Criminal Defense Practice in Queens. "That's just another way for the police to engage that person. I would just hope that person is not always a person of color or someone perceived to be homeless."

"The consequence looming is that poor people have to subsidize the criminal justice system by having these fines imposed," he added.

At a heated MTA board meeting the day after Lhota announced his plan, subway rider and advocate Tony Murphy put things more bluntly.

Currently, littering summonses are a drop in the bucket compared to arrests for turnstile jumping, an underground quality-of-life offense that has drawn criticism for its uneven enforcement.

As of June 25th, police had arrested more than 8,625 people for fare evasion this year, 89 percent of whom were black or Latino, according to a recent DNAInfo analysis.

The NYPD has issued 83 littering summonses in the subway system this year to date, an NYPD spokesman confirmed Tuesday. "Police officers must observe littering in their presence to take action in transit," a spokesperson for the NYPD told Gothamist via email.

The rollout of the MTA's littering crackdown is thin on details. The agency stated that they are "calling on the NYPD to increase its presence at stations to deter illegal activities such as harassment, sexually inappropriate behavior, loitering, aggressive panhandling and littering." Lhota's plan launched one week ago, but neither the MTA nor the NYPD responded to requests for comment on how many additional police officers are being deployed, or where.

The MTA is also planning to launch a public awareness campaign to "educate customers on the consequences of littering," according to the agency. An ill-fated pilot to reduce littering by removing trash cans was scrapped this spring, and the agency announced more frequent track cleaning last fall. 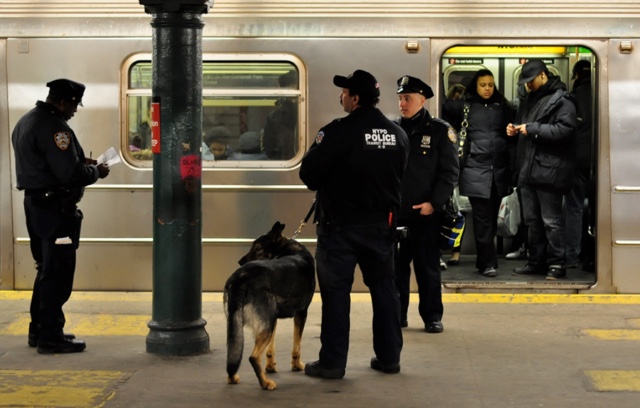 The push for more police officers has been heartily endorsed in the last week by the transit workers union TWU-Local 100, and a top MTA official.

"Seems to be a very small number of summonses for a very large problem," MTA vice chairman Fernando Ferrer told AM New York last week, referencing 698 track fires between July 2016 and July 2017. Track fires cause 700 subway delays annually, according to the MTA.

"Of course the union supports a greater police presence both in the subways and on the buses," spokesman Jim Gannon told Gothamist via email. "The more police, the safer it will be for everyone, riders and workers."

Mayor de Blasio also seemingly supports the measure. Last month he told reporters that while he couldn't "imagine" a ban on food in the subway—another enforcement mechanism Lhota has hinted at. He did, however, suggest his support for more policing. "I think we need to educate people and create some more enforcement," he said.

On Tuesday, mayoral spokesman Austin Finan added, "The goal of cleaning up the subways is to keep people safe, not over-police."

#Lhota
#littering
#MTA
#subway
#we the commuters
#original
Do you know the scoop? Comment below or Send us a Tip
A new Gothamist is coming! We’ve moved comments over to our beta site. Click here to join the conversation and get a preview of our new website.