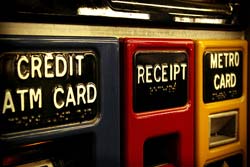 Gov. Paterson is proposing cutting $60 million from the MTA's $10 billion operating budget. That's less than 1%, but further decreases in real estate revenues could make an even larger dent in the budget. According to the New York Post, real estate revenues were off $31 million this month, which could add up to hundreds of millions of dollars annually. The effect on riders will not make many happy: possible service cuts and another fare hike in the near future.

Those are bitter pills to swallow for transit riders who just are getting used to a recently enacted fare hike that affected regular riders, but left single-trip fares alone. Money from the fare hike was promised to be earmarked for service improvements, but recently the MTA backtracked from that commitment, citing budget concerns.

Richard Brodsky, a state assemblyman representing Westchester told The Daily News "A fare hike next year is inevitable." He then added that service cuts with a fare hike, in addition to Paterson's new support of Mayor Bloomberg's congestion pricing fee was completely unfair. "They are beating the hell out of the middle class."

Untitled photo of metrocard machine, by [phil h] at flickr

#bloomberg
#congestion pricing
#fare hike
#MTA
#paterson
#service cuts
Do you know the scoop? Comment below or Send us a Tip