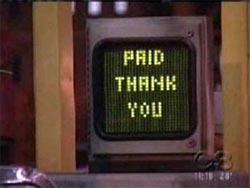 It's on! MTA chairman Dale Hemmerdinger says the agency will go to court in order to have the option of giving free E-Z Passes to retired and current board members--many of whom are wealthy.

The MTA says that the passes are a small thank you to board members who serve without compensation. But Attorney General Andrew Cuomo said, "If the law says no compensation then the law means no compensation and these gimmicks that are a way of providing compensation as perks as a way to get around the law, we believe, are illegal, and we're going to stop all of them."

But Hemmerdinger said, "Given the newly stated view of the attorney general, which is contrary to the M.T.A. position, we are going to seek a declaratory judgment and allow a court to determine whether or not this constitutes compensation. We have never seen it that way.” Man, that's a good idea--spending taxpayer money on legal bills so former chairman Peter Kalikow can keep his eight E-Z Passes (eight so he doesn't have to change one from car to car).

CBS 2 reports the State Thruway Authority, which similarly doled out the free E-ZPasses to board members, "has caved. It agreed to revoke the perks immediately." And it turns out three recipients are dead. The Daily News looked at a list of board members with the perk and found that two had passed away last month and a third died in 2005.

Update: The MTA released this statement:

"In light of Attorney General Cuomo's opinion, the MTA will amend its longstanding practice of issuing free passes on the agency's transit network to its current and former board members.
Subject to approval of its Board, the MTA would rescind its policy of issuing free lifetime passes on its operating systems to former board members. Hereafter, pursuant to the MTA's enabling legislation, active board members may only utilize passes on the transit network to the extent that such use constitutes actual and necessary expenses incurred in the performance of their official MTA duties."