After nearly 14 years of reminding New York's mass transit riders, "If you see something, say something," the MTA is refreshing its public safety awareness campaign by incorporating stories from actual commuters who contacted the MTA about suspicious packages they saw. "You should definitely say something," Melissa Casey told us at the MTA's press conference today. "It's something we should all do. It can save lives."

The PSA's slogan, which was created by advertising executive Allen Kay, has, as the NY Times wrote in 2010, "become a global phenomenon — the homeland security equivalent of the 'Just Do It' Nike advertisement." In fact, the street vendor who alerted the authorities about the attempted 2010 Times Square bombing succinctly told reporters, "See something, say something." The MTA has licensed the phrase to the Department of Homeland Security to be used around the United States. It was even incorporated in an episode of 30 Rock (the one that also mentions a maple syrup smell).

Today, the MTA invited the 27 featured New Yorkers, plus one MTA K-9 police officer and dog team, to a ceremony honoring them and showcasing the new campaign at Grand Central Terminal. There's a long video that explains the campaign, as well as other 15-second and 30-seconds spots featuring specific riders and incidents:

The ads, which are the ninth update of the long-running campaign, include this new line: "New Yorkers Keep New Yorkers Safe." 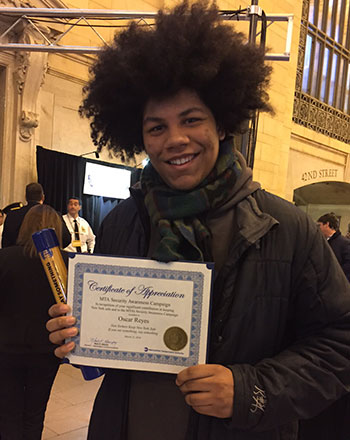 The concerned commuters, who volunteered their time to be filmed in the ads, received certificates and posters of their ads. Oscar Reyes, 18, is featured using a Help Point Intercom to contact an MTA employee.

Reyes had spotted an unattended handtruck with a number of packages along the 6 line, "I had to explain the exact location of the packages." He said he was taken aback when the MTA contacted him to be a part of the campaign—and he didn't tell any of his family about this, "It's going to be a surprise."

A few weeks after the September 11 attacks, Marc Savino spotted an unattended duffle bag on Track 35 at Grand Central Terminal. He lingered there for a few minutes to see if anyone picked it up, because "in New York, it ain't gonna be there," before telling MTA police officers.

"Track 35 is still here, so I guess it was nothing," Savino laughed. He says that the MTA reached out to him about participating in the campaign after he filled out a survey that asked if he had heard about "See something, say something." He answered he did, and mentioned that experience—as well as one where an MTA employee ignored him. "There was a bag left at the Poughkeepsie station... I told the guy at the ticket booth, but he was a jerk and said it wasn't his job!"

Casey also kept her participation a secret until today: "I've been texting with people... [They're writing] 'Did I see you on TV?!?'" 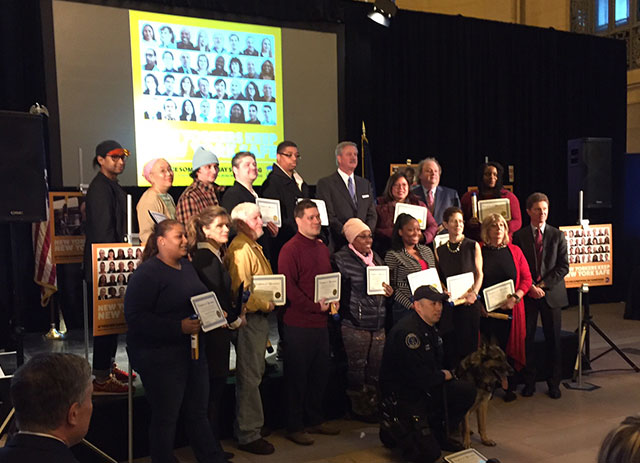 Those who saw something and said something (Jen Chung / Gothamist)

Ten years ago, Jo Murray was taking the M101 bus after a wellness visit for her baby when she noticed a bag behind the bus driver. She recalled, "I asked the bus driver if it was his and it wasn't." The driver called it in and everyone had to get off the bus.

MTA director of marketing and advertising Mark Heavey noted that more and more people were using their cellphones to note suspicious items, which is especially helpful when there are photos and videos. However, Heavey said that cellphone are also a "distraction" and preventing people from taking stock of their immediate surroundings on subways, buses and trains. "Take a moment to look around," he urged everyone, before you dive into your phone.

John Jones was traveling from Fleetwood towards New York City on Metro-North when he spotted a bag that had been left on the train. "It felt weird" to see the bag, and after four stops, he told the conductor. The MTA police were waiting for the train at Fordham, and all the passengers were asked to disembark while the police checked it out; they got back on after the all-clear. "Everyone knows I did this commercial," Jones declared. "Well, not my ex-wife. But my son does."

Looking around soaring Vanderbilt Hall, Jones admitted he was shocked at the ceremony, which had the MTA presentation of flags, speakers from FEMA and Homeland Security, a K-9 demonstration and a good number of journalists. "I thought it would be in some small room in an office," he said. "This is very nice."

#homeland security
#MTA
#public safety
#see something say something
#original
Do you know the scoop? Comment below or Send us a Tip