After promising a "full-blown NYCT renaissance," NYC Transit chief Andy Byford today unveiled an ambitious 10-year plan to rehaul the city's extensive but beleaguered subway and bus system. At an MTA board meeting on Wednesday, Byford presented "Fast Forward: The Plan to Modernize New York City Transit," addressing one leading cause of subway meltdowns, "We believe that we can deliver nearly, not entirely but nearly, the entire subway system onto modern signaling within ten years."

He also emphasized the urgency, "Not acting now is not an option, and it will only get more difficult and more expensive. I believe this can be achieved and we now have a road map."

WNYC's Stephen Nessen reports that the plan (75-page PDF here) promises to "update all signals in 10 years, double pace of accessibility" and "speed up the MetoCard replacement"—"as well as create station managers responsible for cleanliness of their stations."

Byford also wants New Yorkers to see immediate improvements by end of 2018, what he calls “quick wins.” Wants to double pace of accessible conversions, in 5 years wants only 2 stops b/w an accessible station.

Here are highlights for the first five years from the subway modernization plan: pic.twitter.com/zXqRfP0WXP

And then the following five years: pic.twitter.com/69eWMubQ6l 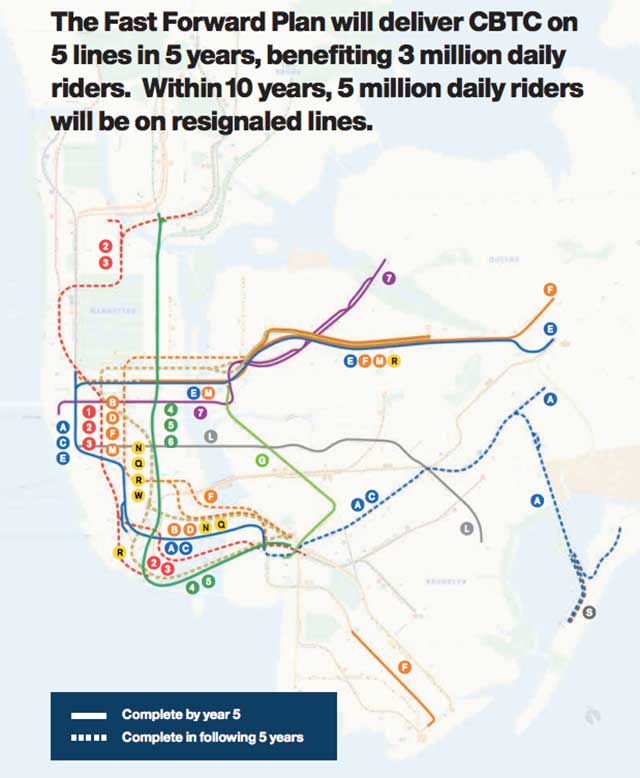 From the MTA's Fast Forward Plan 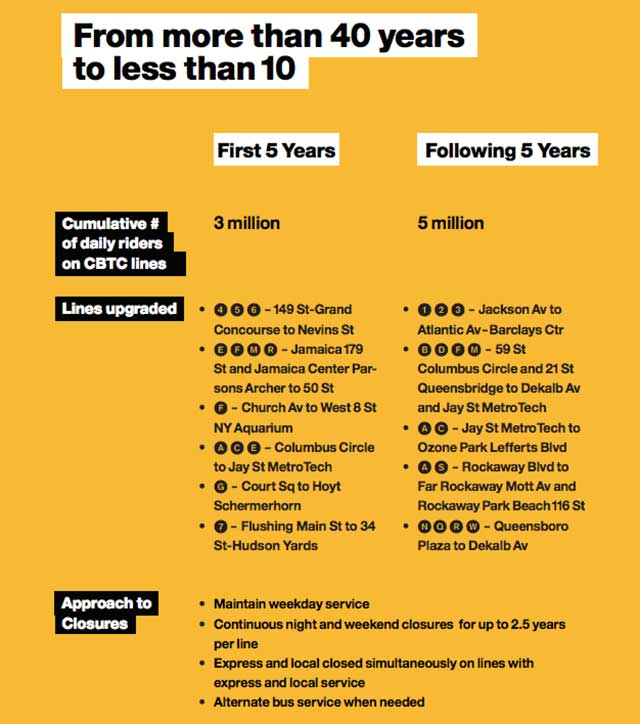 From the MTA's Fast Forward Plan

However, the cost of all this is a big TBD, and MTA funding squabbles have intensified in the past year, thanks to Governor Andrew Cuomo and Mayor Bill de Blasio. The NY Times reported that the plan would cost more than $19 billion, according to two sources, while the Post's sources said it "would see $19 billion spent in the first five years, and another $18 billion in the next five."

“We have to make sure our residents and our elected officials understand that the success of the subway and bus system benefits everyone in the region, not just the people who live in the city.”

Newest MTA board member and real estate tycoon Scott Rechler warns Byford about releasing cost of plan too soon. And says the public will be sceptical when Byford says this will be delivered on time and on budget.

"I don’t think this is the hard sell [to the board]," says Randolph Glucksman. "The hard sell is getting the funding for it."

Reading the body language, when Lhota argues he hasn’t taken Cuomo or de Blasio’s side when it comes to funding the MTA Byford scratches top of his nose and looks down... pic.twitter.com/RNCxaroOfd

MTA Chairman Joe Lhota praised Byford's plan for its bold thinking. As for the NY Times' story about Lhota's many demanding gigs beyond running the MTA, the unpaid part-time chairman of the largest subway system in the world shrugged off any speculation about conflicts of interest.

MTA Chairman Joe Lhota take the de Blasio approach to bad press: says he didn’t read the NYT article on his conflicts of interests. “Not a subscriber to the Times.”

I asked Andy Byford if he's surprised by the intensity of the political debate in NYC. He says no. "I did my homework. I knew this would be a tough gig." He says he likes that transit is a "hot potato" because it shows people care.

#andy byford
#bus
#joe lhota
#mass transit
#MTA
#nyc transit
#subway
#we the commuters
Do you know the scoop? Comment below or Send us a Tip