MTA: Totally Safe To Breathe Deep The Rejuvenating Air Of The L Train

The MTA has made good on its promise to release the results of air quality monitoring along parts of the L line, sharing an inaugural Dust Report on Friday afternoon that suggests the silica panic may have been a bit overblown. For the time being, it remains perfectly safe to breathe deeply the crisp, invigorating air of the New York City subway.

According to the transit authority, the concentration of respirable silica in dust tested in the First Avenue and Bedford Avenue L train stations was found to be well below the conservative benchmark for dangerous exposure. The majority of 28 samples obtained throughout the first weekend of the slowdown contained no measurable traces of silica at all. Three of the samples did show silica in the air, though those levels were between 8 to 12 micrograms per cubic meter of air—more than what you're breathing outside, but still well below the longterm federal exposure limit of 50.

The general concentration of dust inside the tunnel was also found to be safe. On their website, the MTA explains that there is no established standard "for the short periods of time that a typical subway passenger will pass through the station" (hm?), so they're measuring against the longterm exposure standard of 3000 µg/m3 of dust. Here is a graph made by the MTA showing how not dusty the subway was last weekend: 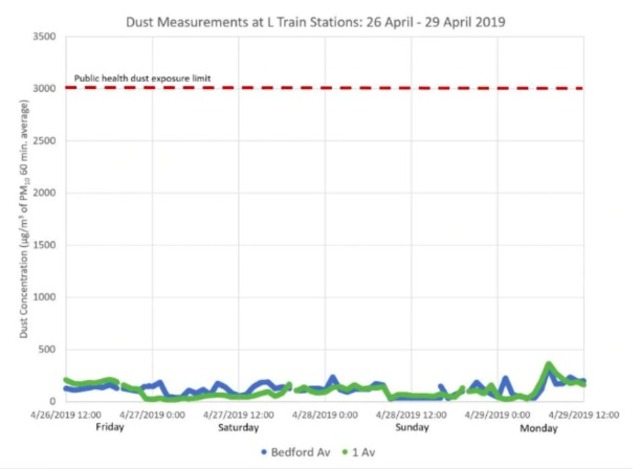 This first batch of publicly-released data comes less than a month after a group of transit workers raised the alarm about potentially dangerous conditions during the 15 month slowdown.

For years, the MTA also claimed that possible silica exposure offered them "simply no other option" but to fully shut down the L train tunnel during the repair period. But that justification changed following Governor Cuomo's intervention in January, with the MTA explaining that they would now be demolishing significantly less of the concrete bench wall, and thus kicking up less dust.

Still, ex-NYC Transit President Carmen Bianco has voiced safety concerns about the new approach, and the current chief of transit, Andy Byford, claimed he wouldn't allow the plan to go forward until it was independently evaluated for safety. That promised third-party evaluation was eventually quashed by the MTA, which has not exactly inspired confidence among some station workers.

There was also that mysterious L train smell that sickened five transit employees back in February, though the MTA maintains that was actually caused by an abandoned diesel tank buried under a former gas station in East Williamsburg. (So, not their fault!)

Anyway, the important thing is that the L train made it through the first weekend of repairs without exposing New Yorkers to harmful levels of cancer-causing dust. In a few hours, weekend two will begin; if you're really serious about your health, experts recommend licking the subway pole.

#dust
#dust report
#MTA
#silica dust
#subway
#we the commuters
#original
Do you know the scoop? Comment below or Send us a Tip