by Kevin Walsh and Neil deMause

The East Bronx will be getting four new Metro-North stations with service to Penn Station, Governor Andrew Cuomo's office announced yesterday. The Metropolitan Transit Authority, the state Empire State Development corporation, and Amtrak have reached an agreement to open stations in 2023 at Co-op City, Morris Park, Parkchester, and Hunts Point, as part of the new Penn Station Access Project to run Metro-North trains down Amtrak's rail lines in the East Bronx, across Hell Gate Bridge, and then into Penn Station.

However, transit buffs know that these "new" stations are really a restoration of local access to a line that last saw local railroad service in the early 1930s. And the success of the new stations could depend on whether the MTA offers discounted fares for travel within city limits, something the authority has resisted in the past.

The New Haven Line, which will include the new Bronx stations, originated as the New York and New Haven Railroad in 1849. By the early 1900s the line had expanded and was known as the New York, New Haven and Hartford; it expanded to six electrified tracks, and terminated at the second Grand Central Terminal at Park Avenue and East 42nd Street that opened in 1913.

The NY & NH opened several stations in the Bronx around this time, all of which were active from approximately 1906 through 1931; they were designed by renowned architect Cass Gilbert, designer of the Woolworth Building. Some of these stations are still standing: The southernmost, the Hunts Point station, is a handsome dormered building on the north side of Hunts Point Avenue at the Bruckner Expressway, currently occupied by stores and scheduled for rehabilitation. The Westchester Avenue station is a Beaux Arts classic, now abandoned, stretching over the tracks at Westchester and Whitlock Avenues at the Sheridan Expressway, featuring the NY, NH and H's winged staff of Hermes with its two entwined snakes. 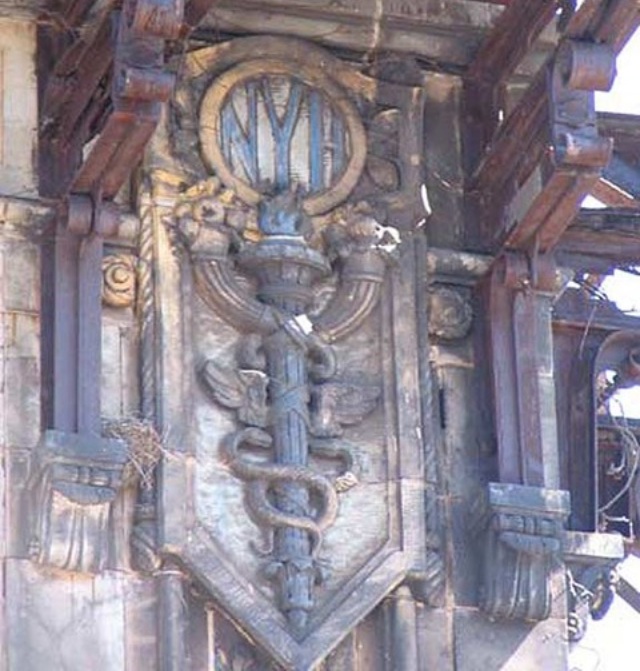 A detail of the Westchester Avenue station. (Kevin Walsh)

The former Morris Park stationhouse ruin can be seen along the north side of the railroad at Sacket and Paulding Avenues; in recent years, someone has festooned it in an American flag motif, with stars at the entrance and bars on the sides. A final station ruin that served the long-gone trolley line to City Island stands in the woods a short distance south of City Island Road from the Hutchinson River Parkway to the City Island circle. Other stops along the line, at Casanova Street, West Farms, Van Nest, and Baychester, have completely disappeared.

While restoring service to these stations will provide much-needed transit access to the East Bronx, which currently relies solely on the 6 train about half a mile to the south, the ride to midtown Manhattan will come at Metro-North prices. Currently, a one-way peak ticket from Mount Vernon, the station closest to the Bronx, to Grand Central Terminal costs $10.75, while off-peak tickets cost $8, which could be prohibitive for commuters from what are some of the Bronx's poorer neighborhoods.

"If the Metro-North continues to charge an extraordinary $9.25 peak fare for the short trip from the Bronx to Manhattan, these stations will be locked behind a paywall, little-used, and this investment will be squandered," says city comptroller Scott Stringer, who last October proposed allowing access to the city's 38 commuter railroad stations with a Metrocard for the present subway/bus fare of $2.75. "If the MTA is truly committed to improving mobility in the five boroughs and eliminating vast transit deserts, it will reduce in-city fares on Metro-North (and the LIRR) to the price of a MetroCard swipe, allow free transfers with the subway and bus, increase train frequencies at local stations, and make all of their stations ADA accessible."

At the time, outgoing MTA Chairman Joe Lhota criticized Stringer's plan, calling it “irresponsible” for not addressing how the MTA would source funds for the shortfall. Stringer's office says the comptroller is currently working on a funding proposal to allow for lower in-city fares.

The MTA says it projects 18,000 to 20,000 riders a day to board or disembark at the new Bronx stations. The authority is currently testing the "Atlantic Ticket," a $5 fare on LIRR trains in southeast Queens and Brooklyn, and says it should be ready to begin analyzing data this summer.

The New Haven line currently shares track with the Hudson Metro-North line in the Bronx—but, as Stringer notes, doesn't make any stops in the borough. In fact, Metro-North only allows its southbound trains to stop to drop off riders coming from Connecticut—a tradition that reportedly dates back to Yale students who wanted to attend Yale-Fordham football games in the 1920s—but won't allow Bronx riders to board, a practice that Stringer has called "government-sanctioned discrimination."

[UPDATE: Shortly after publication of this story, MTA spokesperson Aaron Donovan emailed, "We are reviewing and continue to discuss our arrangement with the State of Connecticut. It is essential to ensure that we’re providing the best service possible to all of our customers.”]

The MTA will pay to build the new stations, as well as for track and signal upgrades on the New Haven line. The governor's office has projected an "initial investment" of $695 million for the project, which will include $250 million from Empire State Development.

Kevin Walsh is the webmaster of the award-winning website Forgotten NY, and the author of the books Forgotten New York (HarperCollins, 2006) and (with the Greater Astoria Historical Society) Forgotten Queens (Arcadia, 2013)

#east bronx
#metro north
#MTA
#the bronx
#original
Do you know the scoop? Comment below or Send us a Tip