MTA: That's Not A Confederate Flag, It's The Symbol Of Times Square!

This week we pointed out that a toy train sold by the MTA in Grand Central, and elsewhere, inexplicably features a Confederate flag.

MTA spokesman Kevin Ortiz did not respond to our inquiries about the toy's bizarrely racist symbolism, but eventually told PIX11, "It's the same design that's at Times Square representing the Crossroads of the World. It's not a Confederate Flag."

What Ortiz didn't mention is that the tile mosaics he is referring to may have been put up in honor of Adolph S. Ochs, "a Southerner with ‘strong ties to the Confederacy,'" according to Civil War historian Dr. David Jackowe. He declared that the mosaics are an homage to Ochs from the station's architect Squire J. Vickers. Here's more from the station's Wikipedia page:

The colored tile trim of the Times Square subway station bears an uncanny resemblance to the Confederate Battle Flag.[26] Scholars believe that Vickers and his colleagues unmistakably reference the symbol of the South to pay homage to New York Times owner Adolph S. Ochs. The Confederacy was a significant part of Ochs' heritage, and the eccentric Vickers relished literary and historical imagery. Times Square was named for the New York Times, whose headquarters, built by the Southerner Ochs, housed the original subway station in its basement. 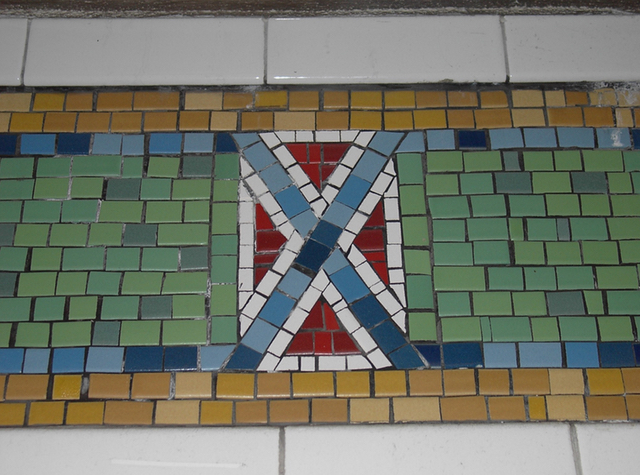 The NY Post reported on the tiles last summer, alerting commuters to the "tiny Confederate flags" they're walking by each day. Their piece was followed up by a NY Times article, which checked the Post's facts, given Ochs formerly owned the paper.

Mr. Ochs, who was the publisher of The Chattanooga Times before coming to New York in 1896, was proud of his ties to the South. His mother, Bertha Levy, had immigrated to Natchez, Miss., from Bavaria. The Post noted, accurately, that Bertha was a member of the Daughters of the Confederacy... "She had embraced a contemptuous antebellum view of blacks, and for the rest of her life was dogmatically conservative, even reactionary."

Upon Adolph Ochs' death in 1935, "the Daughters of the Confederacy sent a tribute described by The Times as 'a pillow the top of which bore a flowered likeness of the Stars and Bars of the Southern Confederacy.'” The Post refers to this, saying "he was buried with a Confederate flag."

The subway tiles were installed around 1917, decades after Ochs took over the Times, and recreated in 1998. When questioned about the tiles last year, the MTA claimed "the banding design was based on geometric forms." This time they noted they're based on "the Crossroads of the World."

There seem to be no reliable narrators here, and neither the Post nor the Times found an answer during their reporting last year. But by looking at it, it sure looks like a Confederate flag.

#confederate flag
#MTA
#subway
#tiles
#Times Square
Do you know the scoop? Comment below or Send us a Tip