MTA Says Bedbug Bus Panic Was False Alarm, But Some Employees Have Doubts

After reports of bedbug sightings on multiple city buses surfaced yesterday, the MTA now says there were no confirmed cases of bedbugs on New York City buses, and that the half dozen vehicles yanked out of service and labeled "Bed Bug" have since been cleared to return to the streets.

Over the last three weeks, employees have reported seeing bedbugs on at least six buses, which were subsequently quarantined at the Kingsbridge Depot in Inwood. According to MTA spokesperson Shams Tarek, a bug specialist confirmed on Tuesday that there are "NO bedbugs" on the buses. "Suggestions otherwise are irresponsible," Tarek added. 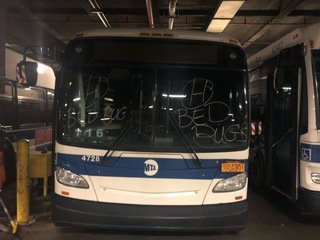 But that denial has irked some MTA employees, who resent the implication that they're crying bedbug, and question whether the transit authority is being totally transparent.

"They're absolutely downplaying it," Michael Enriquez, a bus operator and union shop steward with TWU100 told Gothamist on Wednesday. "How is that these buses are all of a sudden cleaned out, when they've been sitting there for weeks? They're not going to hold buses out of service for that long if it's nothing."

Other employees believe that there are more suspected bedbug buses than the MTA is letting on. According to Felix Olivia, a bus operator who works at the Kingsbridge Depot, there were actually a total of 11 buses that had been quarantined. "It's never been this many buses in a short period of time," he told Gothamist on Tuesday. "We've never had a situation like this."

While Olivia heard that Roscoe the bedbug dog had showed up to the depot on Tuesday, he says that "management hasn't given us the end results." He adds that he knows drivers who were bit during the infestation, and wants more information from the MTA about what really happened.

New York City Transit President Andy Byford, who's pledged to improve transparency within the agency, has also denied the bedbug allegations, telling a Daily News reporter on Tuesday: "A customer did say they thought they saw something like that. We don’t just ignore such a report, we deal with it straight away."

We've reached out to the MTA to ask for additional information about the investigation, and whether it's possible the supposedly infested buses were perhaps crawling with a different sort of pest—something that Enriquez concedes is a possibility.

"If you look at cleanliness of some of these buses, it's atrocious," he said. "It's a breeding ground for all sorts of vermin. There would've had to have been something on there."

Maybe they were just locusts?

#bedbug bus
#bedbugs
#bug fight!
#MTA
#TWU 100
#original
Do you know the scoop? Comment below or Send us a Tip