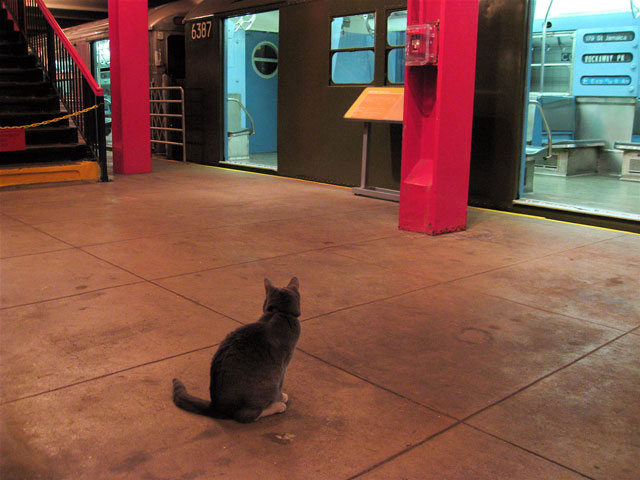 Given that the MTA project billion-dollar budget gaps in future years and that the cash cow of congestion pricing never made it to the altar, there may be a good idea of increasing revenue by way of Japan. The Associated Press has a story about a "money-losing Japanese train company" whose new lease on business life is thanks to a calico cat named Tama:

All the 9-year-old female cat does is sit by the entrance of Kishi Station in western Japan, wearing a black uniform cap and posing for photos for the tourists who are now flocking in droves from across the nation.

Tama has been doing such a good job of raising revenue for the troubled Kishikawa train line that she was recently promoted to "super-station-master."

Super-station-master! Cats are considered good luck (hello, Maneki Neko) in Japan, and people have flocked to take pictures with Tama, as well as buy her various merchandise--"postcards, erasers, notebooks and pins...even a special 1,365 yen ($13) book of photos of Tama called, 'Diary of Tama, the Station Master.'"

Let's face it, cats in the train stations could do wonders with the rodent problem (do cats eat bedbugs?). Heck, there's even a cat at the Transit Museum--the lovely Sadie!

#cat
#cats
#far-fetched idea
#MTA
#nyc transit
#revenue
#train station
Do you know the scoop? Comment below or Send us a Tip