Back in January, Governor Andrew Cuomo announced that the L train wouldn't need to be completely shut down for 15 months between Brooklyn and Manhattan—the Sandy-related repairs on the tunnel could be done with the trains still running. There's just 10 days before Cuomo's repair plan goes into effect (Friday, April 26th!), and the MTA is starting to lay out how it's all going to affect your commute.

According to the MTA, during the work week, L train service will be running like it normally does, every 3-5 minutes or so, from 5 a.m. to 8 p.m.

Weekends in this new scheme begin at 8 p.m. on Fridays, with L trains running every 20 minutes between Brooklyn and Manhattan, and every 10 minutes in Brooklyn, though the MTA also notes that "service on the L will be reduced nights and weekends."

The MTA has maintained that trains every 20 minutes during overnights and weekend nights is "regular service" for the L, and that riders won't notice all that much.

"It sounds like whoever is saying that doesn't ride the L train at night or on weekends," Joe Cutrufo, the communications director for Transportation Alternatives, told Gothamist. "If you've taken the L train at midnight on a Saturday night, it's still crowded."

To address potential crowding on the L, the MTA says they are increasing service on the M, 7, and G trains on weeknights and weekends. A new service map posted on Monday gives riders their options. 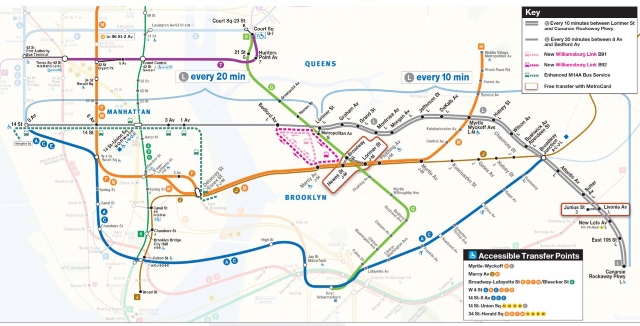 See the full-size version of the map right here. (MTA)

The MTA will add a "Williamsburg Link" bus service that will continuously run between L, G, and J/M/Z stops. The MTA says this is the fastest way of getting Brooklyn riders onto trains and into Manhattan.

In Manhattan, the agency plans on adding more service to M14 bus routes, but unlike the plans for the total shutdown, which called for vehicular restrictions on 14th Street from 5 a.m. to 10 p.m. that would turn it into a "busway," these M14 buses will have to fend for themselves in regular traffic. The M14D was recently named one of the city's slowest bus routes.

Faster, easier-to-board M14 Select Bus Service that was initially supposed to launch in January is now set for June, though there is an ongoing debate over which Lower East Side stops will be bypassed on the new line.

The Department of Transportation did not respond to a question about when the M14 SBS will actually launch.

The weird limbo of M14 service at present: articulated buses, but no all-door boarding - single-file queue instead; enhanced bus stops, but they're almost all blocked by cars; off-board fare collection machines are also installed, but inoperable. pic.twitter.com/pg1OLM9hIW

Unlike the original plan, there will be no HOV-3 lanes on the Williamsburg Bridge, and no MTA ferries from Brooklyn into Manhattan.

"It's really frustrating that this L train slowdown has not really been taken seriously as the transportation nightmare that it's going to be," Cutrufo says.

For those hoping to bike, there's some good news: Citi Bike began expanding into Bushwick and Williamsburg this week, and there are new bike lanes on Delancey Street and 13th Street in Manhattan, and Grand Street in Brooklyn (for now).

The MTA also says they will have hundreds of staffers fanned out across all the affected stations to help direct riders on the first day the changes go into effect, in addition to new signage and literature as part of an outreach campaign to let New Yorkers know what is happening.

You can also sign up for the MTA's L train project newsletter here.

The latest MTA estimate for the duration of the project is 15 to 18 months. Tomorrow, the MTA's board will meet with the agency's executives, and we may learn more about what's happening during the repairs.

#l train
#L train unshutdown
#MTA
#we the commuters
#original
Do you know the scoop? Comment below or Send us a Tip