After months of speculation and little-to-no word from the MTA, top officials finally discussed the details of the forthcoming L train shutdown at the first public meeting on the matter last night. The meeting, held at the Marcy Avenue Armory nearly a mile from the nearest L train station, did not reveal anything that hasn't already been reported about the shutdown: the MTA is now considering two options—an 18-month, total shutdown, or a three-year partial shutdown—and is hoping to come to a decision within the next few months. Neither option would commence until 2019, though the MTA would have to do some nights and weekend work in the run-up to prepare.

As became rapidly apparent throughout last night's meeting, MTA Chairman Tom Prendergast and New York City Transit President Veronique Hakim are leaning heavily toward the 18-month complete shutdown, arguing that it's far more efficient. Doing so would impact 80 percent fewer riders than the three-year option, and the MTA believes that with this option, it could offer incentives to contractors to complete the work in even less time. Under this plan, L service would continue as normal in Brooklyn, but would not run between Bedford Avenue and Manhattan, or at all in Manhattan.

Under the three-year plan, trains would single-track between Brooklyn and Manhattan, stopping every 12-15 minutes at stations between 8th Avenue and Bedford Avenue. There would be no trains between Bedford Avenue and Lorimer Street, but service in Brooklyn past Lorimer Street would remain relatively normal. But under this option, according to Hakim, just one out of every five riders would be able to take the shuttle from Brooklyn into Manhattan. 225,000 people travel between the two boroughs on the L train each day.

"It's crowded now," Hakim pointed. "We are concerned about crowding and how constrained that service would be."

Many of those in attendance wanted to know why, under this three-year option, trains wouldn't run between Bedford Avenue and Lorimer Street. MTA Chief of Operations Planning Peter Cafiero said that's because the shuttles leaving Bedford Avenue would be able to accommodate such a small fraction of those hoping to go into Manhattan, and if passengers were transferring between the L coming from Brooklyn and the Manhattan-bound shuttle, the Bedford Avenue platform would be dangerously overcrowded.

The MTA has officially ruled out what was previously a third option—shutting down service on nights and weekends for up to seven years—because it says that the work that needs to be done would be too disruptive to have L train service up and running in time for rush hour. If trains were shut down for weekends, they wouldn't be ready to go again until the following Tuesday or Wednesday. The Authority is also not considering the construction of a new tunnel, which some in the neighborhood were suggesting, as it says it would simply be too costly and take too much time.

Whichever option the MTA chooses, it says that it will increase capacity on the G, J, and M lines, lengthening G trains in the process. In addition to increasing service on the B39 bus, which goes across the Williamsburg Bridge, it would also like to introduce a new Select Bus Service, which would run across 14th Street in Manhattan and then up to 23rd Street, where the MTA envisions a ferry station that could transport commuters across the East River to and from Williamsburg.

Though last night's meeting was said to begin at 6 p.m., things didn't really get going until 7 p.m.—in the interim, attendees were encouraged to look at the Hurricane Sandy-damaged equipment that the MTA brought in to demonstrate the extent of the work that needs to be done.

The first hour of the meeting consisted of presentations from the MTA and speeches from seven elected officials—the question and answer portion did not commence until past 8 p.m., at which point many of the hundreds of people gathered had left. Attendees were encouraged to write down questions upon their arrival and give them to MTA staff, who in turn passed them to Chief of Staff Donna Evans, who read select questions to Prendergast, Hakim, and the other MTA officials present. By the time the meeting concluded, just past 9 p.m., there were just a handful of people remaining.

"Some of our constituents may or may not yet be convinced, like we were, of the formidable damage that was done to these tubes," said Assemblyman Joseph Lentol. "But let me just say that having been convinced, I am now more than ever convinced…that we have to have a different kind of meeting next time, where not only I get to speak and the other elected officials get to speak, but the community gets to speak."

David Dobosz, who lives near the Graham Avenue station and commutes to Manhattan, was similarly dissatisfied with how the meeting went: he wished that the MTA would have come with more explicit plans for alternate transportation, rather than hypothetical suggestions.

"They're showing us all this rusted stuff like we're supposed to be impressed with their expertise," he said. "But the bottom line is, if they don't provide alternate transportation that can handle the same volume as the L train, all of this is bullshit, one hundred percent. You can't be having 50 buses pile up at the corner of Metropolitan and Union and then trickle through with people being pushed together and crushed. It's insidious."

Dobosz's concern was echoed by many of those who submitted questions read onstage: they wanted to know how a shuttle bus service would accommodate the 225,000 riders who travel between Brooklyn and Manhattan on the L; whether the ferry service the MTA is suggesting could be taken using one's Metrocard; and how increased traffic across the Williamsburg and 59th Street bridges would be handled.

The MTA didn't have any clear answers to any of those questions: it said repeatedly that all shuttle bus and ferry propositions are still hypothetical, and it will need to work with the city to figure out how those would work best. 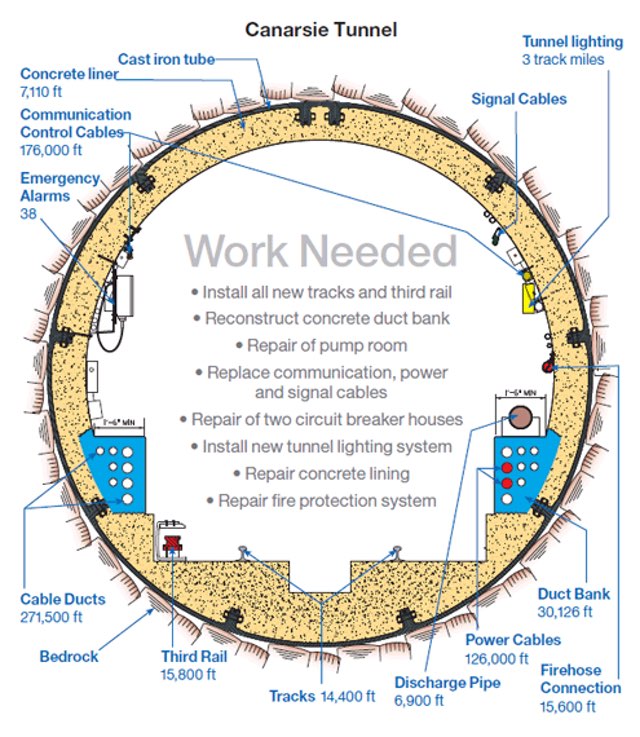 Prendergast and Hakim also emphasized that the Canarsie tunnel is not in imminent danger of collapse, and that the MTA will meet with every Community Board along the L line in the months leading up to its decision.

For the L Train Coalition, which had been pushing for this public meeting for months, it was a good beginning—but the coalition still wants the MTA to seriously weigh community input in choosing between the 18-month or three-year option. The Coalition is conducting an economic impact survey among residents in North Brooklyn, and would like the MTA to consider that, along with a survey being conducted by the Rider's Alliance, in making its decision.

"Now we move onto the next round, which is really weighing the cost-benefit of transportation alternatives, shutdown alternative planning, and also identifying additional resources that could be brought to the table," said Felice Kirby, one of the Coalition's key organizers. "So many of the other options that could be discussed, like ramping up ferry service, is a different set of infrastructure than what the MTA controls."

Kirby was also heartened by the myriad improvements to other transportation options in North Brooklyn that could come out of this shutdown: increased bus service; the re-opening of previously shuttered subway entrances; ferry service; and increased capacity on the G, M, and J trains, among others.

"I think the big takeaway is, North Brooklyn is not dead, and we may come out of this disaster with some improved transportation that long-time advocates have been fighting for for years," she said. 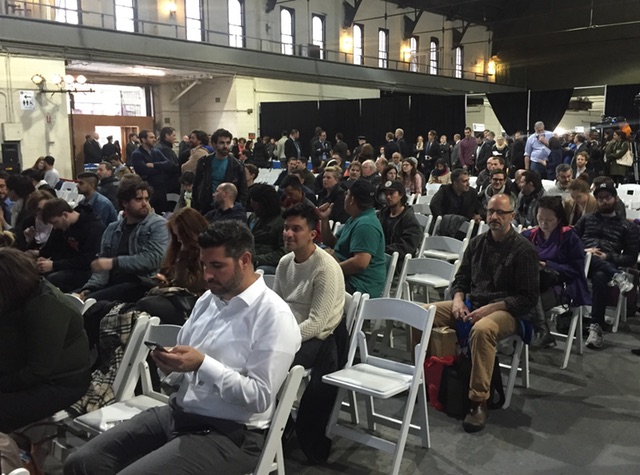 Though the MTA says it won't make its decision for another few months after more consultation with the community, it certainly appeared to be heavily pushing the 18-month plan last night—and indeed, may of those who submitted questions and comments that were read onstage seemed in favor of that option as well. Charles, who grew up in Canarsie and currently works as a conductor for the MTA on the A and C lines, said that from a conductor's perspective, the total shutdown is far preferable: single-tracking is a slow and stressful process, he said, and service between Brooklyn and Manhattan would be heavily crowded.

"If they do the 18-month, they can actually do the work that they want to do, without customers being in the way," he said, adding, "I don't envy conductors on the L train right now."

The second public meeting on the L train shutdown will take place next Thursday, May 12th at 5:30 p.m. at the Salvation Army Theatre, at 120 West 14th Street in Manhattan.

#l train
#l train coalition
#l train shutdown
#MTA
#williamsburg
#original
Do you know the scoop? Comment below or Send us a Tip