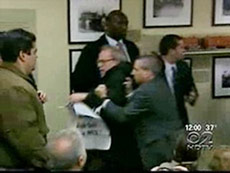 After a public hearing which was full of passion and anger, the MTA's board approved its 2009 budget, which includes service cuts and a 23% increase in revenue from fare and tolls hikes. The MTA is facing a $1.2 billion budget deficit next year, and it's expected a monthly unlimited Metrocard could cost more than $100 while bus lines and subway stops are limited.

The cuts and fare hikes will not go into effect until next spring, which the NY Times points out provides "time for state lawmakers to enact a rescue package to shore up the authority’s teetering finances." (The Post reports, "The MTA legally has to have a balanced budget by year's end, no matter how the gap is filled.") Indeed, MTA Chairman Dale Hemmerdinger said, “Our fervent hope is that available resources will grow in the coming months, so that this budget can be amended before it is implemented.” That sounds like a Christmas miracle—waiting for the state to act!

MTA Executive Director and CEO Elliot Sander said, “I have called this budget draconian, severe, and extremely painful, and it is all of those things." Sander was nearly on the receiving end of one subway rider's frustration when Stephen Millies, an Amtrak worker, stood up to testify during the public hearing. Millies called the MTA "a collection agency for the biggest banks and insurance companies" and demanded to know where Sander was, as he reached for his shoe and yelled, "You made $300,000 last year, and this shoe is for you!" Here's video:

Police arrested Millies and gave him a summons for disorderly conduct. Millies told the Daily News, "I was simply showing the sole of my shoes as a sign of contempt ... "