Smelly trash heaps are piling up in some subway stations, and MTA workers are blaming budget cutbacks, missing trash trains, and confusion about a recent organizational shake-up for the overflowing mess.

A recent video taken at 34th Street-Penn Station shows the extent of the filth: Hundreds of black trash bags piled high in a filthy room, spilling out into the mezzanine, as MTA workers look on in disgust. "Put that on Twitter. That's the only way we're going to get our money back," says one employee, seemingly referring to a new MTA policy that prevents workers from being paid overtime.

The MTA has ✂️ the Stations budget and now this is the result. Customers shouldn’t be seeing this at 10 am on the A line in the system 🤦🏽‍♂️ @PeiSzeCheng4NY @DanielleFurfaro @danrivoli @2AvSagas @jonweinstein pic.twitter.com/dl62ALECj4

The MTA says that they're looking into the unusual trash mountain—and they're likely not the only ones. "When you have an excessive amount of garbage, hundreds of bags that have been there for days, that brings rats," said Tramell Thompson, an MTA conductor and founder of Progressive Action, a popular Facebook group among union activists. "There are rats in clean stations, but that's a rat haven."

In theory, trash collected in stations—40 tons of it across the system each day—should be hauled away on special "high-capacity refuse trains" each night. But ongoing nights and weekends work means that the trash trains can't always make it to their stations, forcing employees to stuff the accumulating refuse into a room until they can dispose of it themselves on the sidewalk. 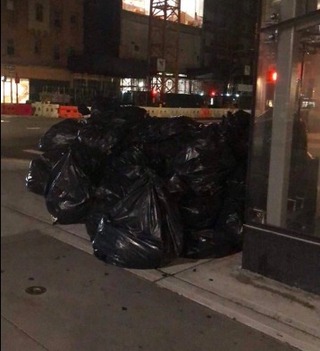 Subway trash taken to the street at 63rd & Lexington, after a trash train didn't show up (Provided to Gothamist)

Additionally, a recent initiative announced by transit chief Andy Byford intended to streamline the station management structure may be having the opposite effect; Thompson says that some of the new station managers are new to the system and not familiar with basic maintenance protocols, like trash removal.

But the root of the problem, he says, lies with the MTA's decision to cut overnight cleaners on six different lines over the last year. In addition to reducing late night workers, a memo shared with Gothamist shows that the authority announced a moratorium on all overtime spending, beginning on October 1st, "due to the current need for significant budget savings in 2018 and 2019." From now on, only work related to emergencies, weather, or the Subway Action Plan will be eligible for overtime, according to the memo.

A spokesperson for the MTA, Shams Tarek, insisted that the budget for station cleaning has not been reduced. “The station maintenance budget has increased under the Subway Action Plan, we’re making more efficient use of that budget by reducing the use of overtime where possible, and safety is always the top priority," he said in a statement to Gothamist. "Any suggestion otherwise is false.”

But Thompson is less than convinced. "Where there used to be station coverage, there’s no longer coverage," he told Gothamist. "When you don’t have people to pull garbage, or put it where it’s supposed to go, you get situations like this."