MTA Investigating Report Of Bedbugs On The 7 Train

The bedbug assault on our mass transit system seemed to slip off a bit this week, but it might be back with a vengeance: the MTA confirmed that they are investigating reports of bedbugs on the 7 train. Excuse us one moment, we'll be right back.

Straphanger Kedem Deletis told Business Insider that he's a regular 7 line rider, and saw the bugs on his commute from Woodside to Bryant Park: "This morning, I noticed them coming out from under the seat to feed on people's legs," Deletis told them. "I was on the 7 express train which arrived at Bryant Park at 10 a.m. The cart I was in was one or two carts behind the center operator cart."

Here's an exclusive photo of the train's bedbug riddled exterior: 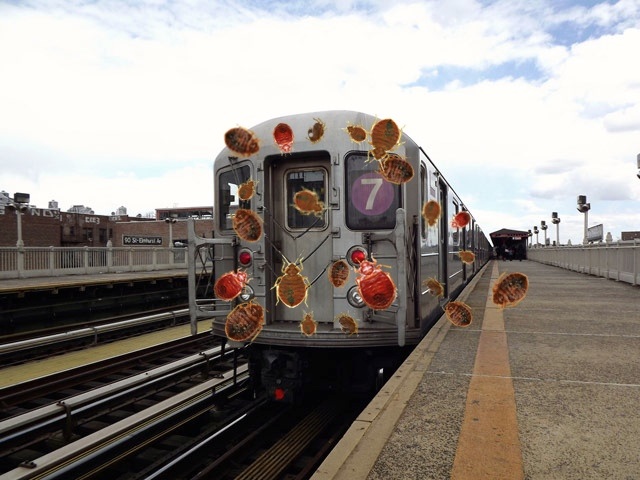 Deletis called the MTA to report it, and was asked what kind of proof he had: "What exactly should I have done? Raised a panic on the train and have people screaming and hurt?" Deletis asked. "Maybe captured one of these bedbugs and risk bringing one home?"

So far this month there have been bedbugs found on at least three N trains, one 5 train, and possibly one 4 train. We'll update the post once we hear more about the MTA's investigation, unless of course they find bedbugs, in which case RUN AWAY.

#7 train
#bedbugs
#chaos reigns
#MTA
#ruh roh
#subway
#train
Do you know the scoop? Comment below or Send us a Tip