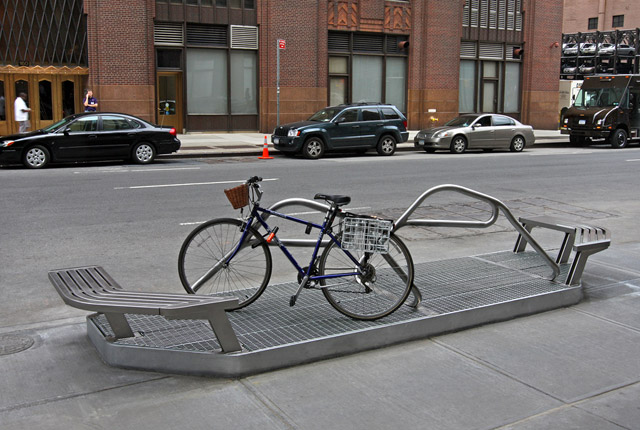 It's prototypelooza today! First ten possible prototype back racks of the future were revealed, and now the MTA has upstaged the DOT with their own street furniture prototype, installed in front of 151 West Broadway between Worth and Thomas Streets. The second of three multi-purpose prototypes, it's designed to prevent subway flooding while ventilating the subway system AND providing benches to sit on AND a place to lock your bike. Why, just about the only thing this baby won't do is shine your shoes while firing off stock tips. But one note to cyclists locking their bikes to these new racks: Keep a tight grip on your keys!

The idea for the new furniture was born out of that horrible day on August 8th, 2007 when storm water runoff shut down large sections of the subway system. In response, the MTA commissioned these elevated ventilation units to stay above flooding. And anyone out there who's ever gazed longingly at a subway grate, wishing there was a place to sit down and savor the warm, subterranean breezes, will be glad to know that fifteen more of these beauts are planned for downtown (pending community approval). Below, feast your eyes on the prototype that's already charming benchwarmers in Jamaica, Queens.