MTA officials faced a wearily resigned public during last night's meeting in Canarsie, Brooklyn about the looming L train shutdown. Canarsie is home to the very last stop on the L line, and though the damaged tunnel under the East River is named after the neighborhood, Canarsie residents have been more or less left out of the conversation until this point, with virtually all of the meetings on the matter to date happening in Manhattan and North Brooklyn.

The MTA was quick to argue that many Canarsie residents just use the L for service within Brooklyn, and plenty who travel to Manhattan can transfer to other trains. But for those that do rely on the L to get to Manhattan, any disruption of service between the two boroughs will lengthen an already daunting commute.

Compared with Northern Brooklynites, many of whom have spent the months since news of the disruption first broke fighting the very idea of a shutdown of service between Brooklyn and Manhattan, Canarsie residents seemed prepared to accept the MTA’s plan, and were sympathetic to the damage caused by Hurricane Sandy: their neighborhood was among those hit particularly hard by the hurricane, and many residents had to deal with flooding in their homes.

“I know how bad a little bit of water in an apartment is, and I can only imagine how having gallons of water in a tunnel can damage it,” said Carol Killiebrew, who lives in a first-floor Canarsie apartment with her two children and said that she’s still recovering from Sandy. “People think Hurricane Sandy happened so long ago, but it takes so long to rebuild. In Canarsie we’re already used to being inconvenienced—let’s just get it over with.”

Killiebrew, who owns a financial services business a couple blocks from her home, said that she frequently relies on the L to meet clients in Manhattan, and that while “love is a strong word to say about the subway,” she’d struggle without it. Still, she, like most people who voiced their opinions at last night’s meeting, said she preferred the 18-month option, which would shut down all service between Bedford Avenue and Eighth Avenue, allowing relatively normal service (trains every eight minutes) between Bedford and Rockaway Parkway.

The 36-month option, of which the MTA has spoken less highly of at previous meetings on the shutdown, would allow limited service between Manhattan and Bedford Avenue, but the MTA says that option would only service 20% of riders wishing to make that connection.

“Why pull a Band-Aid off for three years?” Killiebrew asked.

Whichever option it chooses, the MTA will increase capacity on the J, M, A, C, and G trains, notably upping G train capacity by 160% by lengthening the cars. Just yesterday, state Assemblyman Joseph Lentol wrote a letter to the MTA asking it to increase G train service immediately, so that riders can "begin proactively altering their riding patterns." 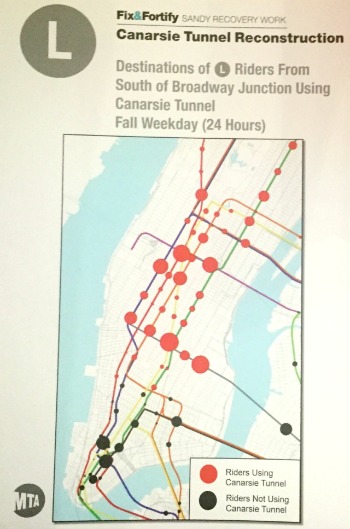 Despite overall support for the 18-month option, several Canarsie residents who attended last night’s meeting objected to the recent survey conducted by Rider’s Alliance, which came to a similar conclusion but primarily surveyed people living in North Brooklyn. That, residents said, was just one way that Canarsie has been excluded from the L train debate so far; several attendees were also angry that the meeting hadn’t been publicized properly, with the MTA announcing it just days in advance, unlike the Williamsburg and Manhattan meetings, for which it gave people weeks to plan to attend.

Others in attendance last night objected to the MTA's focus on running ferries and buses between Williamsburg and Manhattan, which they perceived as targeting toward Northern Brooklynites and Manhattanites. They wanted to know: why isn't the MTA considering enhancing express bus service from Canarsie to Manhattan? In response, the MTA said that even with an L train disruption, multiple subway transfers would still be faster than an express bus, which would have to contend with traffic.

Klinton Anselm, a longtime Canarsie resident who’s retired but frequently takes the L into Manhattan where he volunteers with war veterans, said that without the L train running into Manhattan, he might just defer to his car.

“It’s going to be difficult,” he said. “I’ll have to rely on my own transportation, and those gas costs would be high.” When asked whether he might be able to take another train from Canarsie to get where he needs to go in Manhattan, Anselm considered it, but said, “I’m so used to taking the L, since 1982—it would be hard to change. And it would absolutely add a lot of time.”

One bright spot for Canarsie residents, however, is the fact that the MTA has officially committed to installing a permanent, enclosed free transfer at the intersection of the L at Livonia Avenue and the 3 at Junius Street. The two stations are just steps apart, but currently, anyone wishing to transfer between the two must exit one station and swipe in to the other. In the capital program approved this week, funding is set aside to construct the enclosed free transfer, and MTA Chief of Operations Planning Peter Cafiaro said that while that likely won’t be in place by the time work on the Canarsie tunnel commences, anyone wishing to transfer between the two stations will be able to do so for free starting in 2019.

“We’ve been wanting that for a while,” said Cheryl Hall, who usually takes the L to Broadway Junction and switches to the A or C, but could more easily switch to the 3 to get to her office in Lower Manhattan. “One day there was a problem on the track and we had to get off at Livonia, and you had to go into the street, come back up, and pay another fare. But money is money, you know?”

When attendee Destiny Burns pointed out that such a free transfer should have been made available years ago, and said that she was “completely outraged” it would take such a drastic situation to lead to that transfer being put in place, MTA Chairman Tom Prendergast admitted, “It should have been done before, I won’t argue that. The way this system was built by three separate entities that were in competition with one another prevented those connections, so it’s taken us scores of years to get those connections in place. But I agree with you, it should have been done before.”

The MTA plans to choose between the 18-month and 36-month options in the coming months, and says that it will go to all of the community boards along the L before that point. Once a contractor is selected later this year, the MTA will be able to release information about planned service interruptions leading up to the full or partial shutdown in 2019.

#brooklyn
#canarsie
#l train
#l train shutdown
#MTA
#original
Do you know the scoop? Comment below or Send us a Tip